Your OGR is to be presented as a single Scribd presentation on your blog, beginning with your name, date, and project title. Save your documents as PDFs before uploading to Scribd, as this should mitigate against formating glitches. Your OGR presentations should be uploaded to your blogs by 9pm on Wednesday 23rd January. Written feedback will follow as a 'comment' on your OGR post and will take between 2 - 3 days.


From Script To Screen OGR: What do you need to present?


The emphasis of this first OGR is not you giving me full-blown scripts, but rather these condensed summaries of your stories and structures. You might have written more in-depth versions as part of your own process, but all I want to see on OGR day is your ability to express your stories in their most essentialised way.

This is one line that sums up the writer’s starting off point, the rationale for the existence of the story.  It can be vague along the lines of a theme like:


Or simply sum up the starting off point for the story something like:


This is a summary of the story made in one or two sentences that attempts to answer the questions: Who is the lead character/s? What is their problem? How will they deal with it?

It can be useful to write because it forces the writer to distill what happens in the story down to the briefest possible summary. This in turn makes it necessary to make choices that can reveal what the most important part of the story is.

This maps the entire plot scene by scene in a limited way. The action is summed up in paragraphs consisting of a line or two for each scene.


No doubt you'll want to 'get through' this story stage so you can start drawing your characters etc., but please refer to the 3D Production Pipeline diagram below: notice that the 'design' phase doesn't begin in earnest until after the story has been made ready for the screen via storyboards and an animatic.  This is because designing stuff your story ultimately doesn't need or designing stuff for a story that doesn't work is a waste of time and money.  It is inefficient to give time, energy and artistry to creating completed, polished production art if the script is weak.  Crafting a decent script that tells a satisfying story is HARD WORK - and it will no doubt feel that way.  This is okay. This is how it goes - but if you move into production on a story that doesn't work on paper and doesn't work 'on screen', you are missing the point of this project. 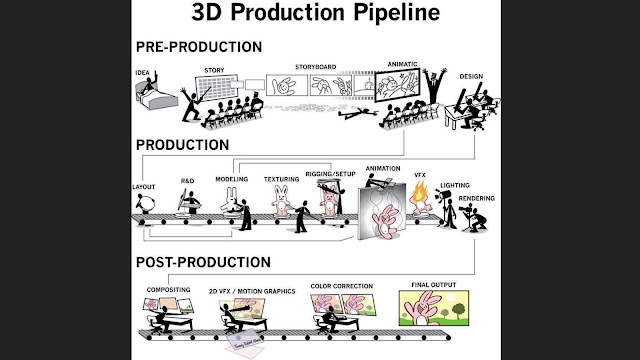 In addition, your OGR should evidence that you are up-to-date with your film reviews and ongoing Toolkit project work (life-drawing/Maya tutorials/Nat's animation exercises/Justin's character exercises, Kat's Audition classes etc). Your OGR might include links to the corresponding posts and/or images. Historically, students who use their OGR to manage their weekly tasks in this way manage their workloads more successfully.


Remember, you're gunning for a 'green light' - you want to take your script into the storyboarding stage as soon as possible, so ensure your story idea is developed sufficiently and communicates effectively. Please note: your OGR should be a professionally presented, spell-checked, with an emphasis on graphic design, layout and project branding.