2016 was the year of the 'horror clown' - watch this documentary for a way back to simpler, less macabre incarnations.  Indeed, there is a sense of childlike wonder at work here, and for animators, character designers and environment people, there is a wealth of visual reference here. Enjoy.

Working in the Theatre: Clowning from American Theatre Wing on Vimeo.
By tutorphil at 16:45 No comments:

“Tonight’s December thirty-first,
Something is about to burst.
The clock is crouching, dark and small,
Like a time bomb in the hall.
Hark, it's midnight, children dear.
Duck! Here comes another year!”
Ogden Nash, 1929

2017 does a feel a bit like that, doesn't it? Who knows what's coming next in these newly uncertain times.  2016 has been both absurd and a bit terrifying - a clown with a shotgun. I won't be alone tonight in my sense of satisfaction at showing it the door.  I don't know about you, but the whole Carrie Fisher thing was pretty much the last straw.

How lucky I am to work within a community of young, aspiring artists whose ambition and creativity always make the future seem bright and a place worth visiting.  It's New Year's Eve and what better way to usher in 2017 than with an all-new pristine edition of the Computer Animation Arts Post With The Most and our monthly celebration of talent, imagination and the inarguable benefits of a university education.

Three months ago, our first years arrived in the CAA baseroom all big-eyed and trepidatious and worried about pretty much everything.  Now look at them - boisterous, clever, and coming on nicely. Term one concluded with their What If Metropolis submission - a project requiring them to work closely with the ideas and imagery of another artist or designer to envision a fantastical city.

It's no secret group projects can prove hugely challenging, no less so for our current year two students, who, I suspect, will take yet more time to truly value lessons learned during their recent collaborations.  Conflict resolution, negotiation, forbearance and perseverance may not seem the equal of flashy renders or dynamic animation in terms of gauging a project's success, but these are invaluable skills only learned by going through something difficult - diamonds pressed from coal.

I'm not sure how great a time our third years had this Christmas.  It must be hard to truly relax when you've got your minor project hand-in in the second week of January, and your dissertation hand-in a few days later! Nonetheless, I hope they managed a few mince-pies in between hitting their keyboards and marshalling citations.  Here's a glimpse of some of their ongoing progress on their final year animations.  Join me in wishing them all the very best of luck for their January submissions. 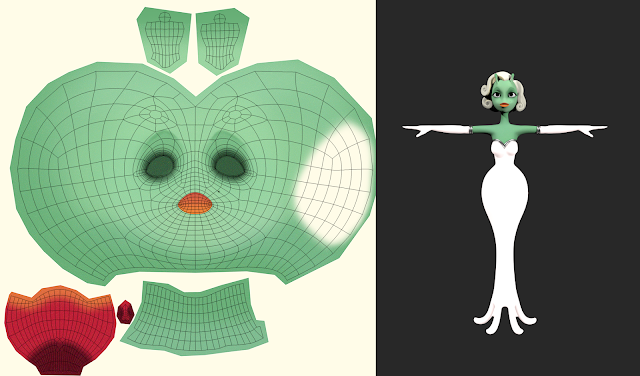 As work continues on CAA's adaptation of Benjamin Britten's The Young Person's Guide To The Orchestra, CAA alumna, Emily 'Class of 2015' Clarkson joins the fold. The YPGTTO script calls for multiple cityscapes deriving from specific orchestral instruments, and Emily has been busy visualising sets of individual assets, soon to be translated into 3D models.


On December 6th, CAA's celebrated visualisation of Darius Milhaud's ballet, La création du monde was screened to a full house at Zilina's concert hall, Slovakia, with live accompaniment by the musicians of the Slovak Sinfonietta. Simon Chalk was their conductor and master of ceremonies, and following a short presentation explaining the provenance of our animation, the lights dimmed, the musicians began to play, and shapes and colours began pulsing across the screen.

La création du monde was screened in Zilina as part of the ONE is more programme: An Orchestra Network for Europe – ONE - is a distinctive network of classical symphony orchestras initiated by Orchestre de Picardie in 2003. Since 2005, it has received support from the European Union under the Culture Programme for 4 cultural projects. Its successive periods of activity have been called ONE, ONE - a new dimension, ONE step further and from June 2011 to 2015 ONE goes places. In 2010, under the title ONE is more, it prepared an application under the Creative Europe programme of the EU. For this bid, the University for the Creative Arts joined the partnership.

This is the fifth screening for our animation, which began life as a multi-participant speed paint challenge, in which the students, alumni and staff of Computer Animation Arts were invited to visualise Milhaud's jazz-inspired ballet as a series of abstract digital paintings. CAA alumni Tom Beg and Jordan Buckner then worked with the resulting paintings, translating them into moving image. In common with previous screenings, the experience of watching the animation accompanied by the full bombast and beauty of a live orchestra was magical and transformative. Many thanks to Simon Chalk, for all his fizz and enthusiasm for the project, and to Keith Burden of Clever Projections, who not only ensures our screenings are faultless, smooth and gremlin-free, but who also drove the three thousand mile trip to Slovakia and back in the short space of four days!

“Stay afraid, but do it anyway. What’s important is the action. You don’t have to wait to be confident. Just do it and eventually the confidence will follow.” Carrie Fisher