I'm not going to lie... it's been a really busy month on Planet CAA.  Indeed, it's only as I sit here putting words to 'paper', that I'm able to reflect on just how busy we are!  I've got updates on no fewer than four big extra-curricular projects with which the course is involved plus the usual 'all-you-can-eat' smorgasbord of visual treats offered up by all three tiers of our student community. Highlights this month include all the latest from CAA's final visualisation of sound extravaganza for the Orchestra Network for Europe, and progress too on our Heritage Lottery-funded animated short, Marcus & The Mystery Of The Pudding Pans. You'll also find fantastical cityscapes and skylines, exuberant character designs and some pristine 3D models...

Let's begin with some of those fantastical cityscapes, courtesy of CAA Yr 1 and their What If Metropolis challenge, wherein they have to design and visualise an imaginary metropolis from their original concept art and then recreate it as a digital set.  For all of our first years this is the first time they've worked creatively in Maya on their own designs and they're meeting this task with a mixture of trepidation and excitement.  Next month's PWTM will showcase their efforts, but for now, enjoy this peek behind the scenes...


As part of their Toolkit 2 workshop-based classes with freelance character artist, Justin Wyatt, our Year 2 students have been developing an original character in response to a series of weekly prompts and exercises.  Week-by-week, tentative pencil sketches have been growing more resolved and distinctive personalities are beginning to shine.  Here's a little selection from their blogged updates so far...

In addition to their Toolkit 2 projects, the second years are also up to their proverbials in their Collaboration project, where, working as tight little studios, they're creating a series of animated skits.  Moom is CAA's 'pre-vis guy' - our ready-to-animate character who pops up all over the course in different guises.  Moom likes nothing more than dressing up - which is lucky, considering the many ridiculous outfits he endures for the sake of our students' scripts!  Frankie, Adri and Annie at Pixel Moon Studios have cast him in the role of 'hapless superhero' in their 1950s public information pastiche...

I gave the third years a bit of fright early this month when I announced on the group blog they only had seven weeks before the submission of the Minor project, which for most of them represents a hugely significant halfway point in the production of their final year films.  The production of CG animation is so labour-intensive and so unforgiving, it can be easy to drag your feet (it's a marathon, not a sprint) and likewise lose sight of the goal... but we're 100% confident our final year students have got all the necessary va-va-voom to rocket past their project milestones and smash their personal bests!  Here's a smattering of their recent updates, and as with all featured students, you can visit their individual blogs by clicking their names!


Next week, Red & The Kingdom Of Sound, CAA's adaptation of Benjamin Britten's The Young Person's Guide To The Orchestra, will be screened in Zilina, Slovakia, accompanied by the musicians of the Slovak Sinfonietta, conducted by Simon Chalk.  This will be Red's seventh live screening in the concert halls of Europe, with additional performances in Bulgaria and Slovenia scheduled for January 2019.  Just today we learned Red & The Kingdom Of Sound was awarded 1st Prize at the Animation Marathon 2018, Greece - out of 148 selected entries! Well done, everyone!

Meanwhile, work continues on our final 'visualisation of sound' project for the Orchestra Network for Europe - creating four animations in response to Hector Berlioz's Romeo and Juliet.  Thanks to Ethan Shilling's bespoke Spectro plug-in (which creates simulations directly from Berlioz's music) and Deanna Crisbacher's dab-hands at texturing and lighting, we're moving quickly towards some finished work in readiness for the premiere in Katowice, Poland in February 2019.


On Friday, 16th November, I returned to Herne Bay Junior School to preside over the auditions for the  'search for Marcus' - Marcus being the titular amnesiac bowl in Marcus & The Mystery Of The Pudding Pans - a Heritage Lottery-funded animated short we're making for the Seaside Museum Herne Bay chronicling the journey of a Roman pottery bowl from its kiln in France to its eventual home at the Kent seaside.  We wanted to work as closely as possible with Herne Bay Junior School and we had the idea of casting one of their talented pupils as the voice of the film's title character. I had a truly lovely day at the school, auditioning forty-plus children, before whittling them down to a short-list of eight hopefuls, and then finally announcing Lake Blumenthal as 'the voice of Marcus'.  Lake was an absolute natural - super confident with great comic timing - and Lake and I will be rehearsing together in the next couple of weeks as we prepare him for his appointment at Television Production's sound studio at Maidstone TV Studios.

Now that we have our voice, we need to start preparing our characters to emote and speak!  CAA graduate, production designer and animator, Emily Clarkson, is busy in all kinds of ways on this project, and is currently readying all the individual mouth-shapes and expressions in readiness for lip-synching duties...

In addition to our cast of walking, talking 'pudding pans', we have Scuttle - a rather sarcastic, eye-rolling crab who assists the pudding pans during the course of the animation.  CAA's senior lecturer, Alan Postings, has just completed modelling Scuttle in 3D and laying out his UVs in readiness for texturing.  It's always a bit thrilling when a 2D character design arrives in 3D and Alan has captured this character's dead-pan, long-suffering comportment perfectly!  I can't wait to see the Pudding Pans' crabby side-kick in action!


Jordan Buckner graduated from Computer Animation Arts in 2012 and since then has worked on multiple creative projects as a freelancer and also works as a lecturer in art direction, film-making and CGI here at UCA and likewise at Portsmouth.  Back in May, Jordan (and twelve other animators) received a grant from the BBC/BFI to create an original animated short. I worked with Jordan as the film's producer and Jordan invited Emily Clarkson to work with him as his principle animator. Entitled _sleeper, Jordan's film is a creepy, ambiguous film with hints of David Lynch, Edward Hopper and the tableaux vivants of Gregory Crewdson.  Following a premiere at the National Film Theatre on Monday, November 19th, Jordan's film will air this Sunday, December 2nd, on BBC Four - make sure you check it out (it will be available on iplayer too).


It was genuinely exciting to watch Jordan's film on the big screen at the NFT (which until that point I'd only watched on the small, blurry screen of my laptop).  Jordan's cinematic eye (which brought so much to Red & The Kingdom Of Sound) has originated some striking off-kilter images and I felt the hairs on my neck rise in appreciation as his strange and melancholy story unspooled in the dark...  Clever lad.  I couldn't be more proud of him. 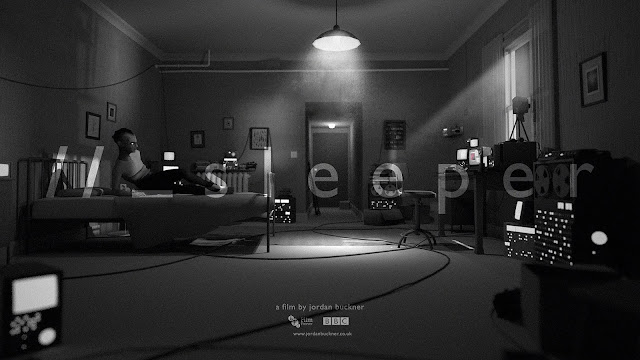 
"A director* must be a policeman, a midwife, a psychoanalyst, a sycophant and a bastard."
Billy Wilder