Just 12 days to go until the TOD 2015 Big Prize Draw - and you're chance to win some incredible prizes: a Cintiq 22HD, an Xbox One, 12 month subscription to Digital Tutors, the BB8 Star Wars Droid toy, 1 week's work experience at Dovetail Games, and lots more! 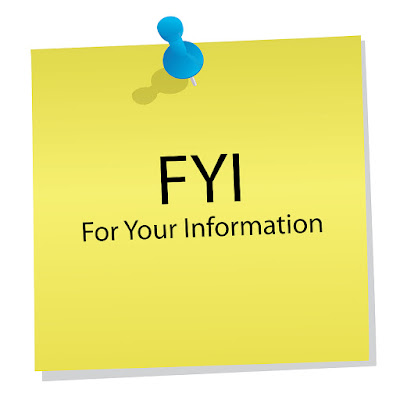 Dear all - just letting you know that tomorrow at 11am in the CAA Baseroom, I'm expecting some guests from UCA Epsom, to whom I'll be delivering a course 'Show & Tell.  This doesn't mean you can't work in the baseroom, it just means I'll in in there too with some potential newbies. Wednesday is an Open Day, which again won't effect you, but please be aware that the building will be busy with visitors, so keep the CAA suites respectable and be prepared to get 'looked at' as you work by interested bystanders...
By tutorphil at 21:24 No comments:

Welcome one and all to the November edition of the Computer Animation Arts Post With The Most., our latest round-up of creative high-jinx from the CAA community. The end of the year is approaching fast, and with it thoughts of feasting, of snowflakes as big and soft as goosefeathers, and of slumberous afternoons in front of The Sound Of Music. Our students are tired, but busy. Deadlines loom. There is still much to accomplish before any chestnuts are roasted, and it won't be thoughts of sugar plum fairies keeping our creative community awake into the wee small hours - it will be the caffeine!

First up, some delightful silliness from our first years and their 'Animation Friday' sessions with tutor, Meg Bisineer.

Life-drawing classes are a weekly opportunity for our students to 'get back to basics'; to step away from their PCs, loosen up, observe and take quick, expressive risks.  Different models, different exercises and different media combine to create some lovely stuff.  It's always an exciting moment when the students' drawings start to enliven their blogs - and this is just a tiny selection of work originating from their November sessions.

And when not animating bouncing bubblegum coloured cats or celebrating the human form in charcoal and coloured pastel, our year one students have been set to work designing some extraordinary digital sets inspired by unusual collaborations with improbable production designers.

In just the space of a few short weeks, we've turned our first years into creative 'one-stop-shops' - they are the designers and they are the art department. They are the set-builders and the lighting designers, the prop-makers and the set-dressers. In short, they are cg artists who design everything from top-to-toe. Enjoy this selection of their concept paintings and production art - now poised to become 3D models.


Eleanor Spence - The City Of Taboo (inspired by Leigh Bowery)


"The City of Taboo is a chaotic, even from a distance it barely looks like anything resembling a city. Anyone who approaches it out of curiosity will be quickly taken aback by the hideous mash of colours and structures laid out before them, and the further they venture, the more overbearing the city becomes. The houses have been pulled apart, rearranged, coated in paints and fabrics, each one as over the top and hideously colourful as its neighbour. Looking at them, you could hardly say they were houses at all..."

"Looming rectangular skyscrapers are scattered across the miles of land Vitae inhabits..." 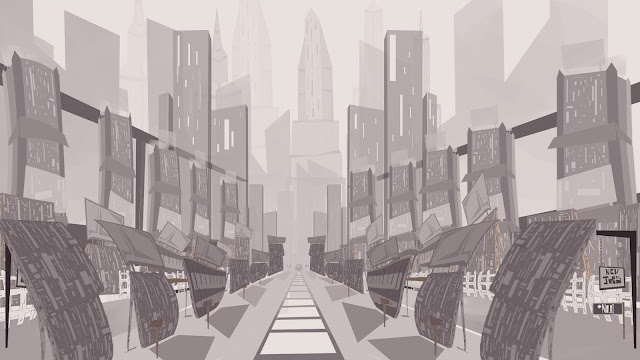 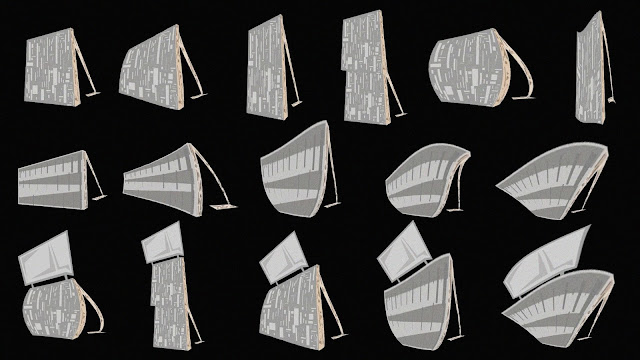 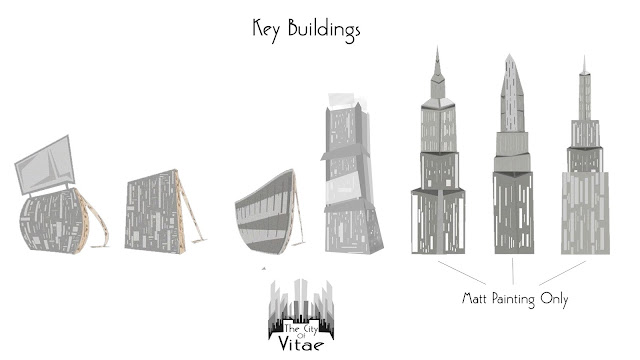 Pip Harris - The City Of Sendsel (inspired by Beate Kuhn)

"The city's mass is comprised of many coral outcrops, breaching the surface of the water for miles around, each one differing in spread and height tothe next, and all interlinked by networks of roads and bridges, some held up on struts built upon the rocky foundations not far below the surface,others hewn from arms of inter crossing corals, with driftwood and seaweed suspension bridges creating pathways in the higher levels of the city,precariously strapped and tacked into the hollow structures." 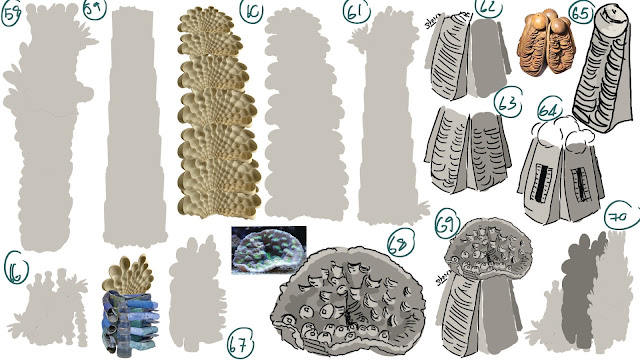 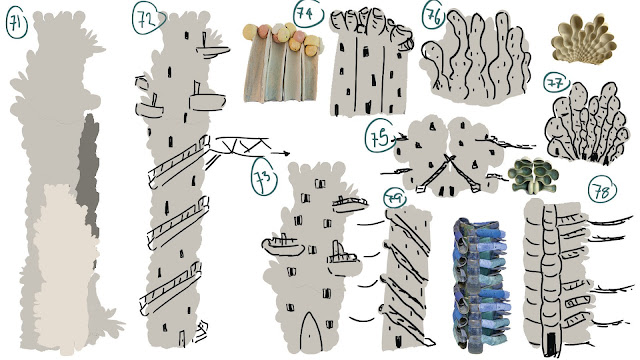 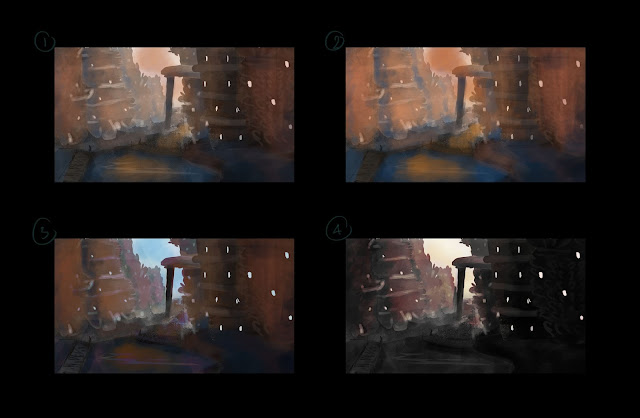 Tom Smith - The City Of Aglomerción (inspired by John Galliano)

"The creator's headquarters; the tower, a gleaming white apartment-like tower resembling the body of a female model... Spotlights shine upon its long curvaceous figure..." 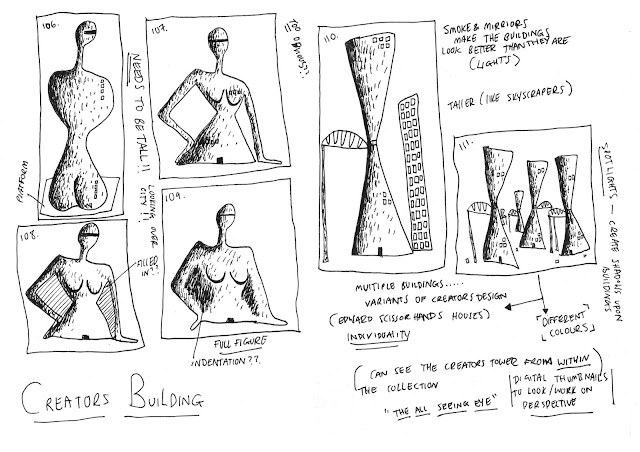 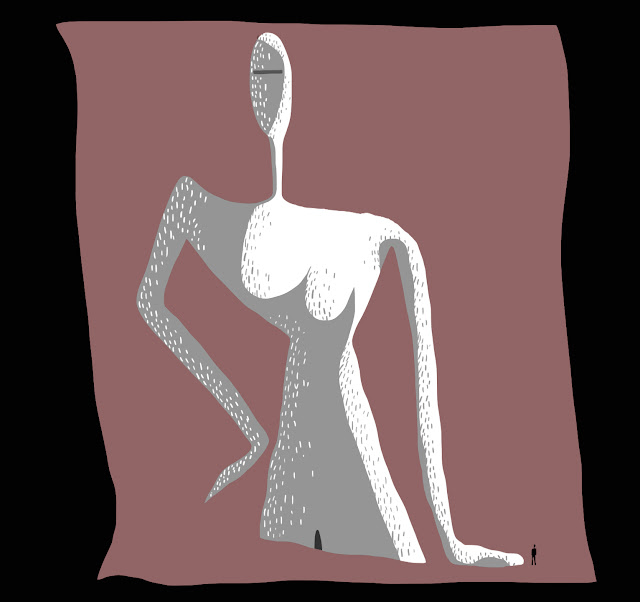 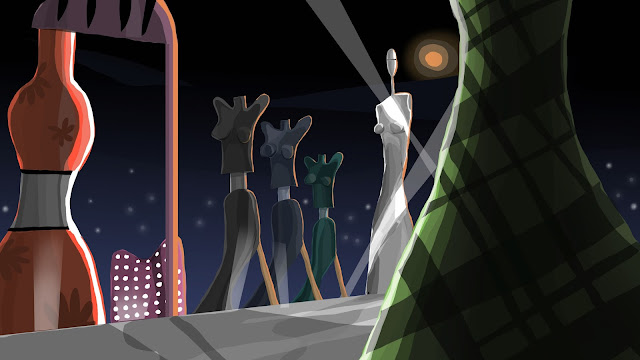 Deanna Crisbacher - The City Of Denoria - (inspired by Richard Deacon)


"The city needs space...  It is surrounded by emptiness and nature.  No other civilisation can be found for miles.  The city often appears to be vacant; there is a higher chance of seeing an animal wandering the streets, while catching a glimpse of another person is like seeing a ghost." Kristina Botinova - The City Of Florayle (inspired by Angie Lewin) 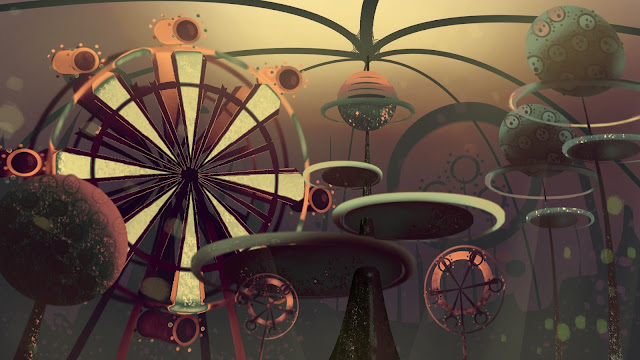 Danni Foley - The City Of Ostwyn (inspired by Saul Bass)

"As you travel across the rocky terrain, you set your eyes upon the City of Lights - an expanse of screens and electricity surrounded by a canvas of bright stars and galaxies." 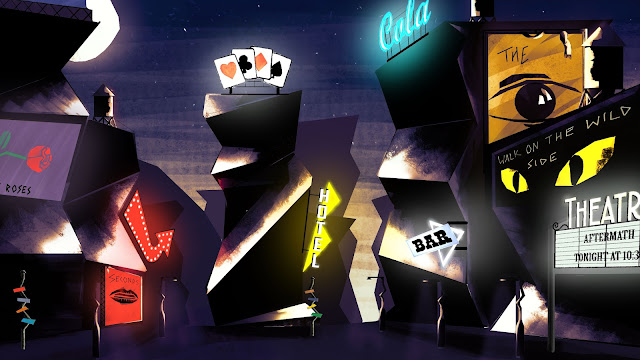 Meanwhile, our Year 2 students are working simultaneously on two big ambitious projects; their collaborative 'studio' project, in which they must work together to produce an animated short, and their 'character design' project, in which they're challenged to devise a cast of distinctive characters for a gaming idea.  What follows - and in no particular order - is a gallery of pre-production from across both projects... 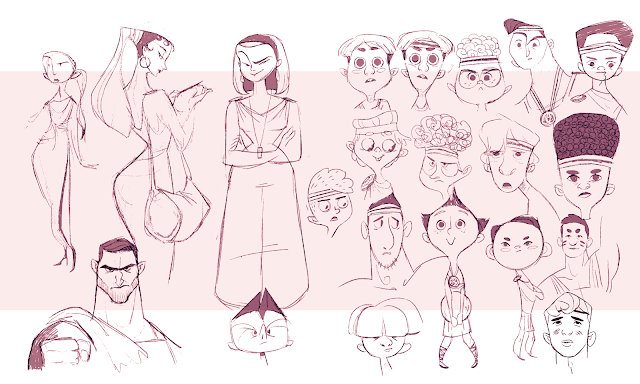 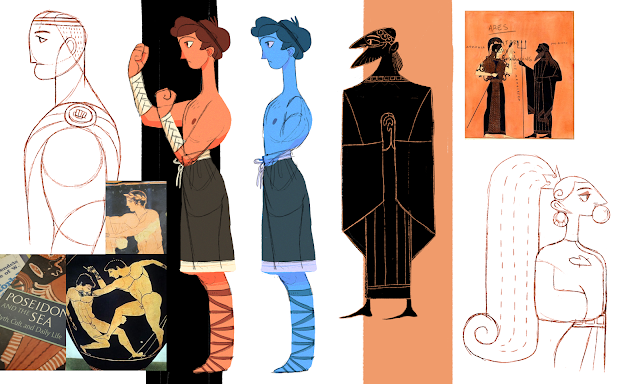 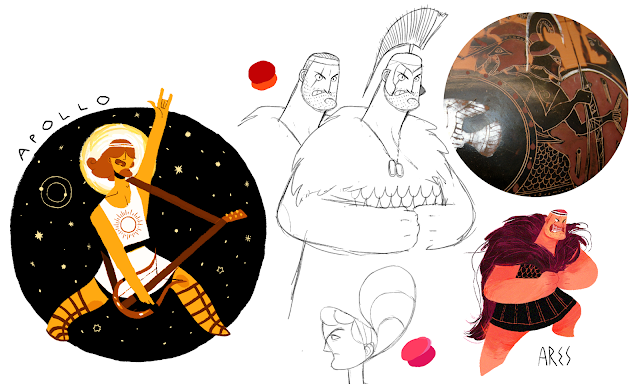 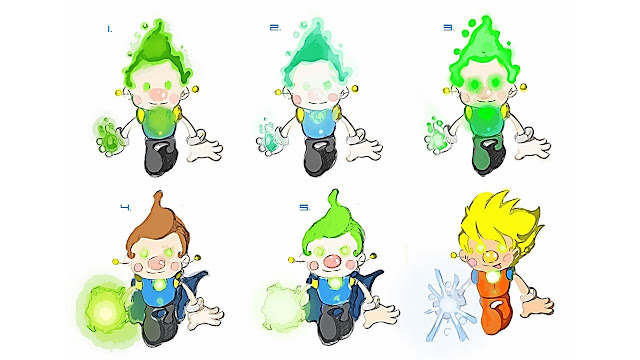 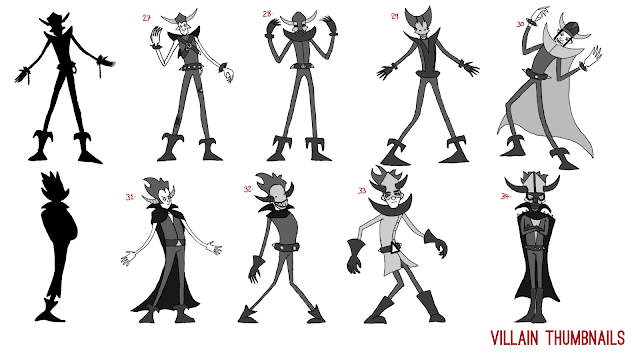 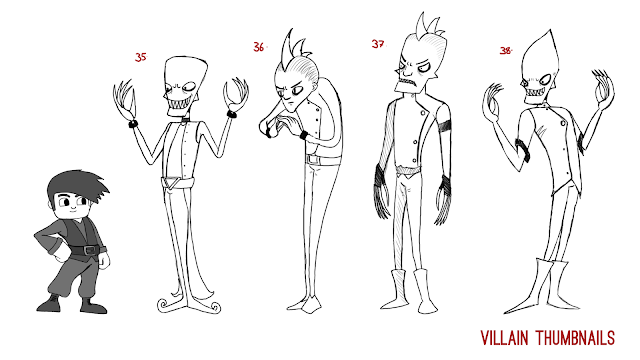 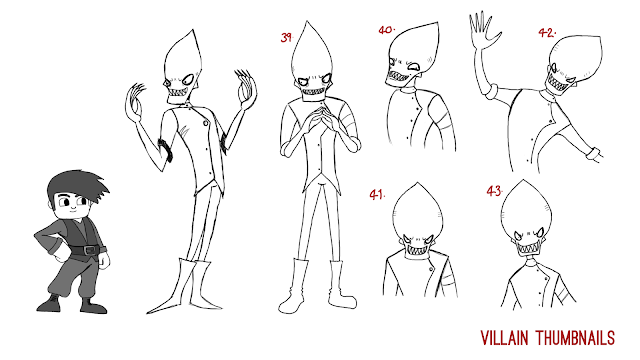 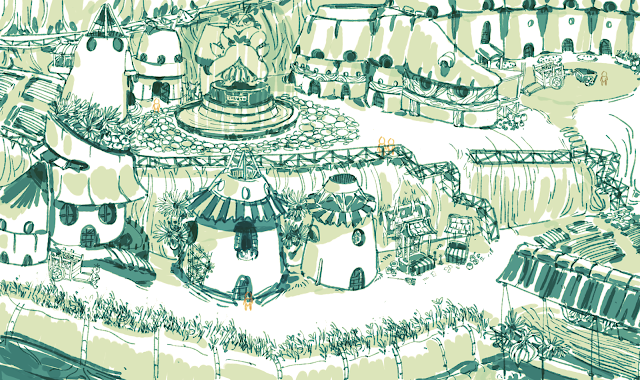 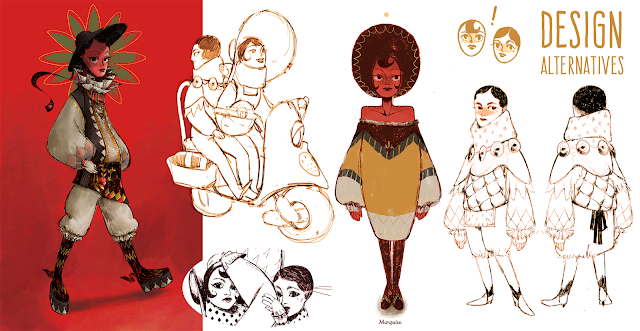 Our third years are all currently working on the pre-production/production phase of year long projects. Josh Aldis' animated short tells the epic story of a determined gang of neglected vegetables who must survive a lethal obstacle course and the attention of a curious canine in order to bust their way into the life-preserving haven of the refridgerator...

Heidi Grover is giving the Brothers Grimm a postmodern mash-up make-over, as she assembles key characters from their various stories into one kick-ass medley; meet Silver and the Bear Prince, two of Heidi's goodies, and the Beast - the big bad.

Sam Cannon's animated short, The Day Dreamer, introduces us to an 'everyman', who is stuck in a rut of sleeping, waking, commuting and working - until one day his habitual journey to work takes a fantastical turn... 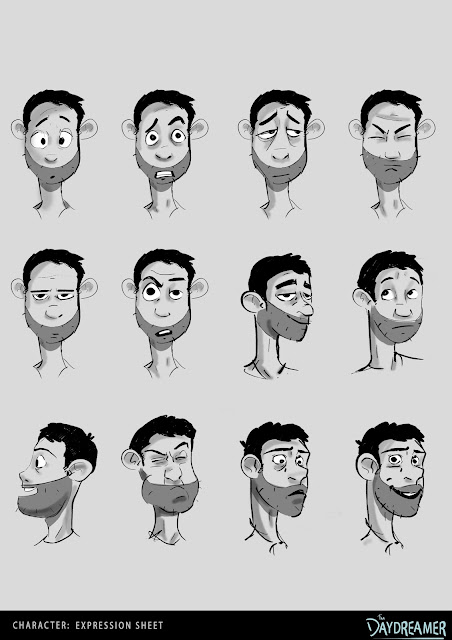 The Daydreamer / Animatic (no sound)

Ayunie's animated short is an adaptation of Jenny Joseph's irreverent poem, Warning, which introduces us to a lady refusing to grow old gracefully...

An Orchestra Network for Europe – ONE - is a distinctive network of classical symphony orchestras initiated by Orchestre de Picardie in 2003. Since 2005, it has received support from the European Union under the Culture Programme for 4 cultural projects. Its successive periods of activity have been called ONE, ONE - a new dimension, ONE step further and from June 2011 to 2015 ONE goes places. In 2010, under the title ONE is more, it prepared an application under the Creative Europe programme of the EU. For this bid, the University for the Creative Arts joined the partnership.﻿

UCA was invited to participate in ONE following the success of a previous European-funded project  - ACT (A Common Territory) - which saw staff, students and alumni from UCA's Computer Animation Arts, Creative Arts For Theatre Film, Television Production and Graphic Design: Visual Communication collaborate with orchestras, performers and performances in France and in the UK. Initiated in 2011 by the Orchestre de Picardie, ACT (A Common Territory) is a network of five French and eight English cultural operators, working from the local to the European level in complementary sectors ranging from classical music, contemporary dance, secondary and higher education, production and community work.

As part of ACT, Computer Animation Arts participated in three distinct projects: we created a seventeen minute animation in response to Darius Milhaud's jazz-inspired ballet La création du monde, designed to accompany live performances of the piece, as performed by the musicians of Orchestre de Picardie.  Our next challenge was turning Verdi's Requiem into seven physical sculptures by using animation software to translate the conductor's movements into three dimensional forms.  For our final ACT collaboration, we used 3D modelling software to design a series of kinetic props to be used in a touring performance of Benjamin Britten's Noye's Fludde.

Computer Animation Arts' first activity as part of ONE sees repeat screenings of our animation, La création du monde alongside the musicians of Orchestre de Picardie in two venues in France: Théâtre Municipal, Abbeville on December 7th, and at the Salle de l’Eden, Hirson on December 9th.

Part archive, part creative studio, the CAA/ONE blog will chronicle our continuing adventures as we collaborate with some of Europe's finest orchestras and seek to develop creative new responses to challenging  and exciting projects.  Follow - and watch this space!