Every Monday on the CAA course blog, a number appears - black text on a yellow background, the colour of  belligerent Summer wasps, of hazard warnings and 'Police - Do Not Cross' crime-scene tape...  Its appearance no doubt triggers shooting pangs of urgency in the frontal lobes of our students, who know very well its significance; this is the countdown to final deadline day.  These are the remaining days between 'the now' and 'the end' (though in common with most endings, 'the end' just means the beginning of something new).  There will be nerves and apprehension as the end of the academic year looms large - but there'll be excitement too as students feel their skills and experience combining to transformative effect.  Without exception, every one of our current students are now undertaking their most ambitious project yet.  This latest edition of the Computer Animation Arts Post With The Most seeks to celebrate once more the talent and individuality of our animation Padawans, beginning with a showcase of their most recent life-drawings.


In addition to all the visual explorations undertaken by our students, we also push our budding filmmakers to consider the potent role of sound design in the creation of compelling, engaging and immersive story-worlds. Year one students first try their hand at sound design when they're challenged to create thirty second soundscapes for abstract imagery.  Their conceptual mission is complicated further on account of them having to record all their own original sound effects before post-producing them in Adobe Audition.  The students have to pin back their ears and listen out for the extraordinary within the mundane; they need to demonstrate the skill for 'magical listening' - for transforming everyday sounds into otherworldly auditory experiences.  Enjoy this small selection of their resulting soundscapes.

I've no doubt all their experiences in creating soundscapes for these 'inner-space-style' images will help our first years engage creatively with their final project of CAA Year 1 - a commission-style brief wherein they've been tasked with revitalising a selection of bioscientific scenarios, choosing between the carbon cycle, pollination, and the cardiac cycle.  Their commissioning client has been quite clear - the resulting 3 minute CG animations need to be as factually accurate and educative as they are innovative and appealing.  In just a few short days time, the first years will be pitching their ideas to the client in a bid for an unequivocal thumbs-up.  Here's a selection of their 'works-in-progress' - and in common with all work featured in the PWTM, click on the students' names to access their individual course blog should you want to dig a little deeper into their respective projects.


Premise - the final project of Year 2 - is for all intents and purposes, the first project of Year 3. Creating CG animations that are both technically accomplished and meaningful in terms of storytelling and filmmaking is incredibly challenging.  A student might be encouraged to 'rob Peter to pay Paul' - i.e., rush their story-development and production design stages in order to expedite the CG stuff, or conversely, rush the CG production of their films because they've given too much time to the development of their project ideas.  Premise gives our students the time and space to develop the foundations of their final year films with confidence.  The ultimate goal of this project is for students to have everything in place and greenlit at the conclusion of Year 2, leaving them with one complete year to put their short films into production.  I'm personally very enthused by the breadth and range of project ideas currently under-development by our second year students, with projects ranging from highly-personal animated documentaries to classic animated shorts. Enjoy this selection of character sketches and other developmental work.

Joe Warrilow is developing an animation in the Creature Comforts tradition, wherein out-moded household appliances discuss their circumstances; in this clip, an old remote control reflects on his plight...


So, let's return for a moment to those ominous black numbers on their yellow background - the ticking clock, counting down the days until the final hand-in on Friday, May 11th.  Our third years will be feeling that pressure acutely, vacillating no doubt between bouts of terror and euphoria, both wishing for the clock to slow, but also for their projects to be out of their lives already, so they can live a while without the nagging certainty that they're supposed to be getting on with it. Perhaps it seems insensitive on my part to say how exciting I always find this time of year - like a happy spectator watching the last laps of some epic superhuman feat of creative endurance.  But I am excited nonetheless.  Everyone has indeed come a very long way and a lot of water has passed under the bridge, but now, there is only this - the last project and all our shared hopes for it.

Back when I was at school and it was the last day of term, we'd sometimes be allowed to bring in board games to play, watch some big 1980's film on some chunky VHS player or ditch our school uniform for the day.  Fast forward to the end of our term on Computer Animation Arts, and I arranged a rather more impressive treat by which to see in the Easter holidays: a guest lecture gig from creature designer, Tim Napper, who was responsible for those rather beautiful crystal foxes in The Last Jedi (among many other extraterrestrial wonders).  The CAA base room was packed with students, alumni and staff and we listened enthralled as Tim described his 'warts and all' journey from a fine art degree at UCA Canterbury to working alongside Rian Johnson at Pinewood Studios. Tim's story exemplified the importance of 'life-long learning' and loving something with enough passion and tenacity to make stuff happen regardless of bumps in the road.  Tim left our little creative community suitably inspired - and with a new-found respect for the very real seriousness of non-disclosure agreements!

Finally then... some elliptical black and white images pertaining to the work already underway in preparation for Computer Animation Arts @ New Designers 2018...  It's no small feat to export the creativity and dynamism of our course to a convention centre in Islington - and battle your way into the attention spans of the show's 3000-or-so visitors.  It's early days obviously, but the concept for the 2018 stand is coming very clearly into focus and I did spend a few days in UCA's spray room performing artful acts of vandalism involving a dead PC and a desk-tidy... More updates soon! 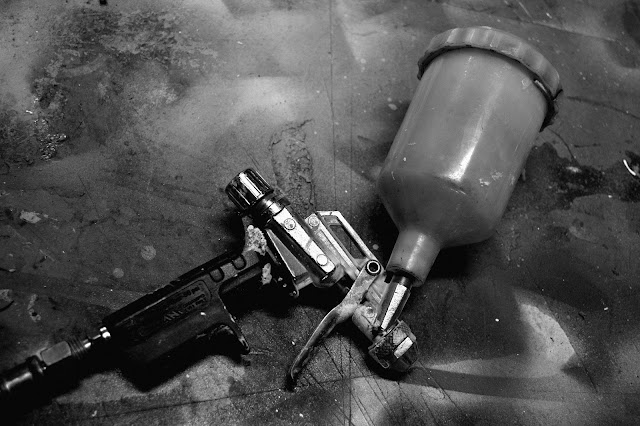 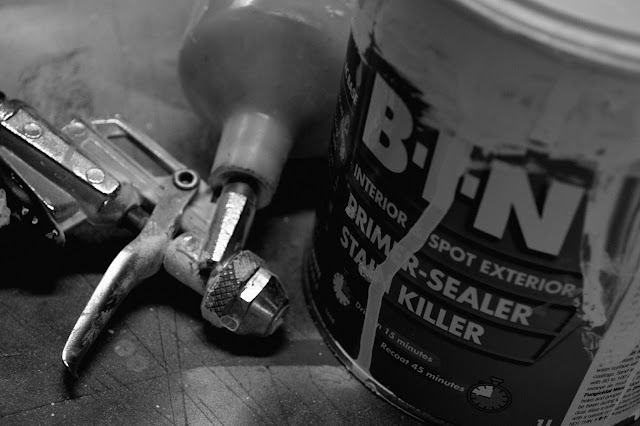 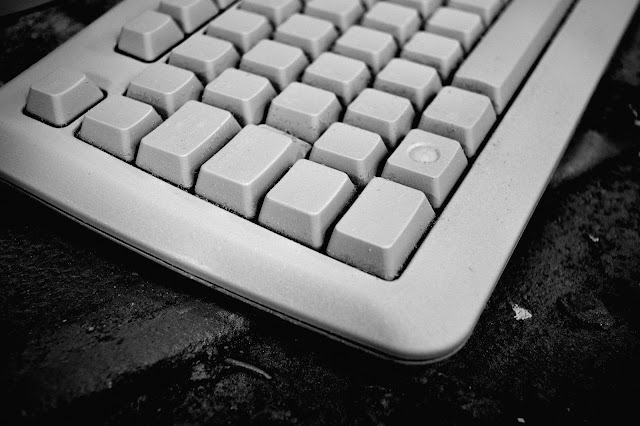 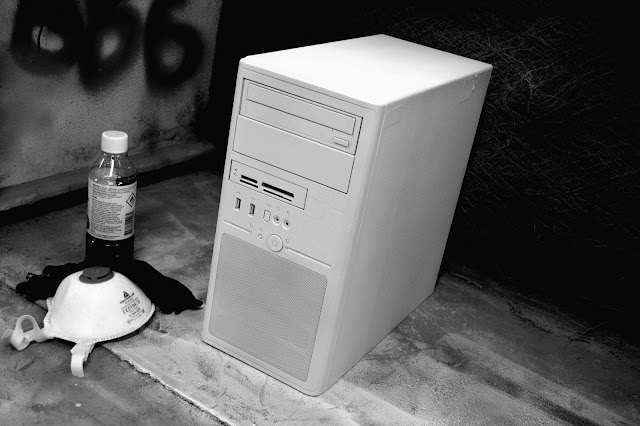 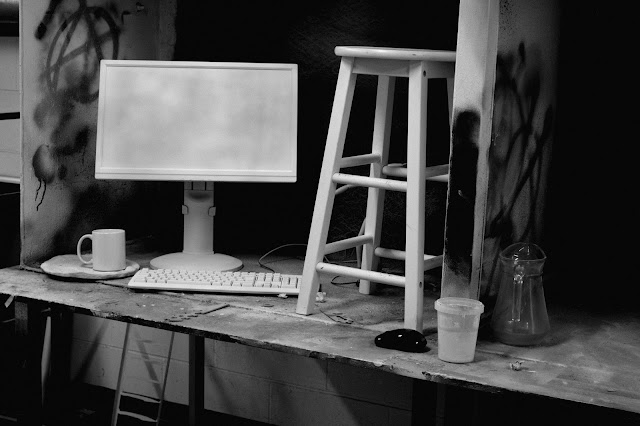 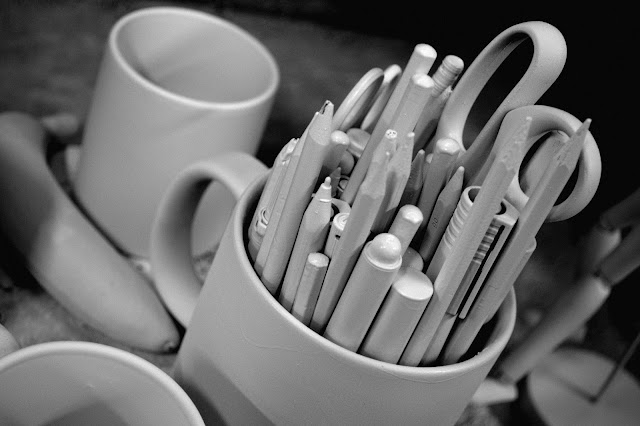 “The future belongs to those who believe in the beauty of their dreams.” Eleanor Roosevelt