February, season of romance! Hark! Is that the flutter of Valentine cards falling in profusion upon your doormat?  What? You mean, you didn't get snowed under with pink tat, petrol station roses and teddy bears holding upholstered hearts? Don't despair!  Let this freshly-minted edition of the Computer Animation Arts Post With The Most suffice - our monthly love letter to creativity, technology and the crafting and grafting of bright young things.

First up is a show-and-tell from our industrious third years, who can be found sitting quietly at their work-stations, immersed completely in the necessary minutiae of their respective pipelines.  Admittedly, the making of cgi is not much of a spectator sport; indeed, it sometimes appears as if glaciers are moving more quickly, but click-by-click, the magic is happening... 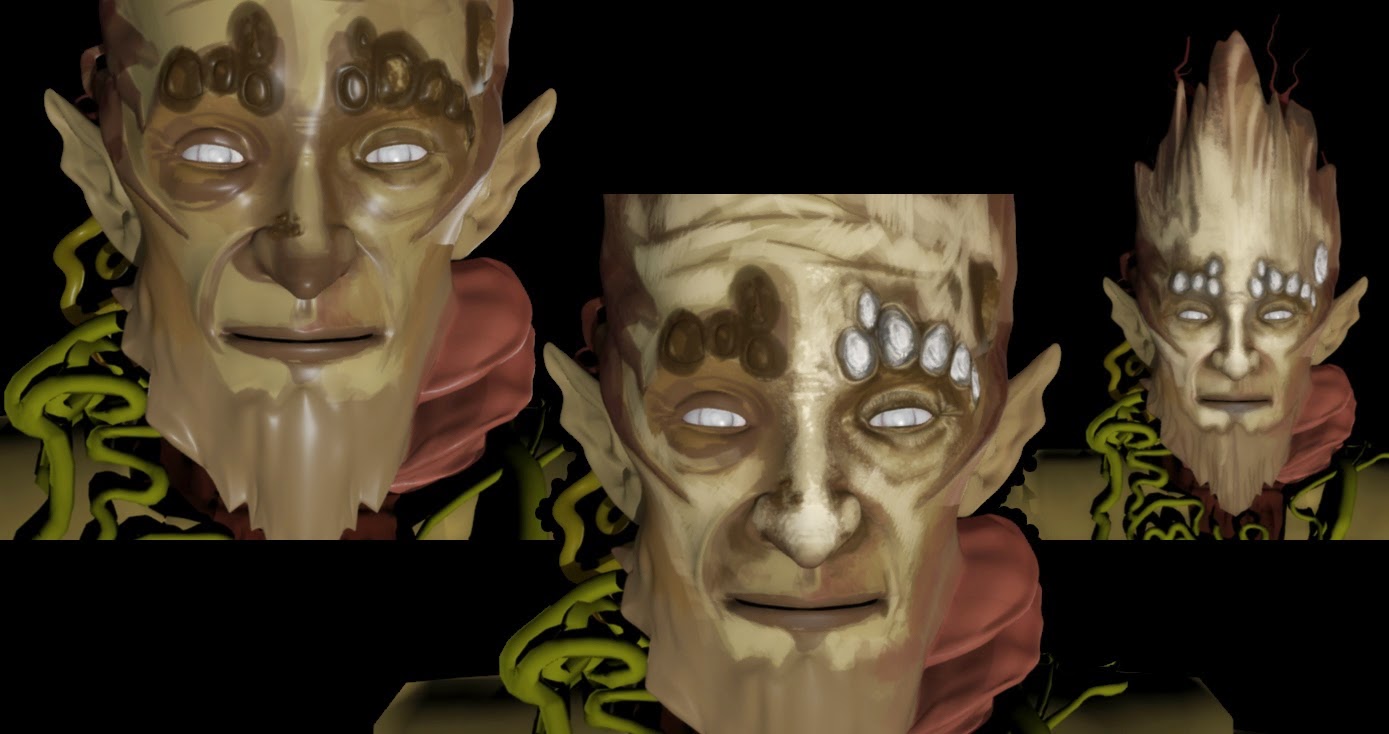 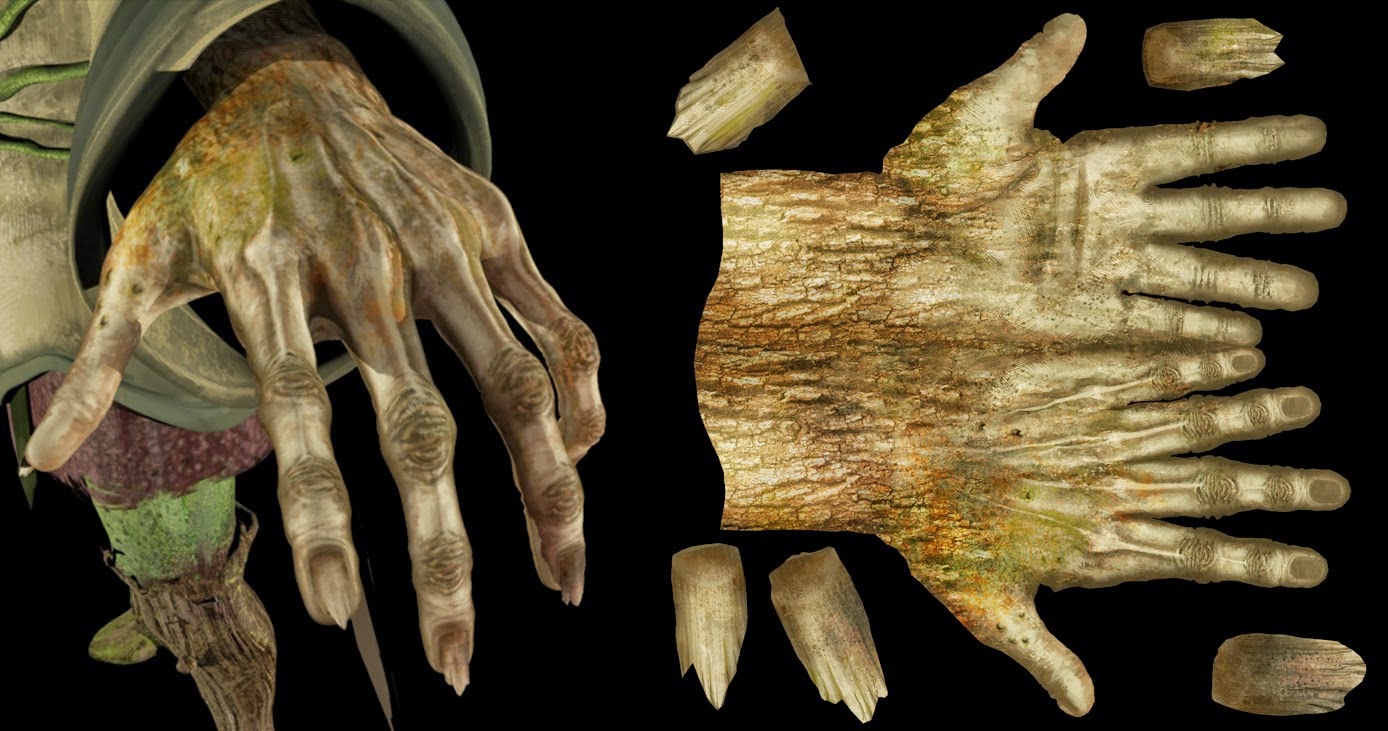 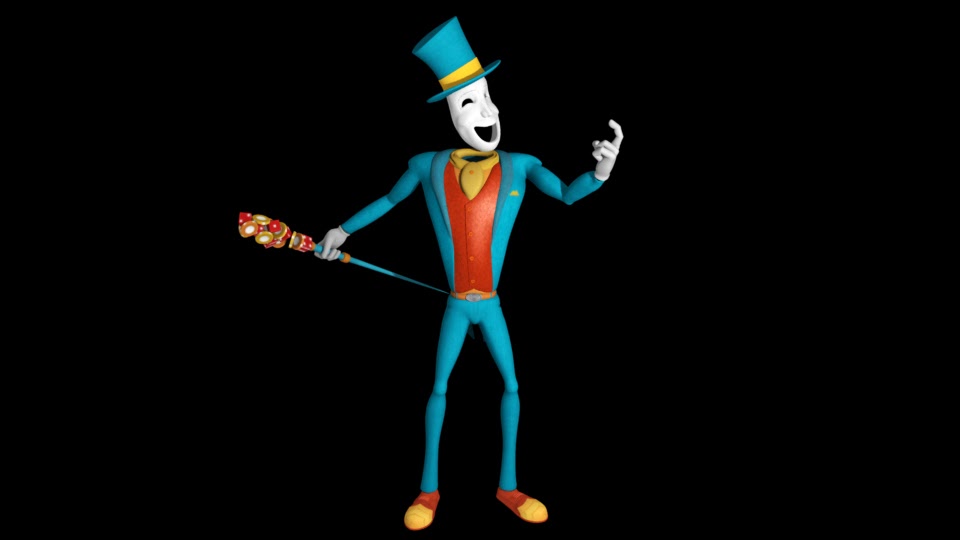 
Vikki Kerslake - The Koi & The Crane

Meanwhile, our Year 2 students are in the throes of their Adaptation unit - a two-part doozy that seeks to challenge any surviving comfort zones, diagnose any stubborn or beloved blindspots, and push students to acknowledge which skills they may still need in order to make the very most of their third and final year with us.  Adaptation Part A asked students to create an original infographic - an exercise in essentialising information through the design and execution of motion graphics.

Heidi Grover - How The Potato Changed The World

Adaptation Part B requires our year 2 students to choose an existing source and transcribe it for cgi. The scope of these adaptations is wide-ranging and the expected outcomes diverse, often reflecting the students' increasing desire to specialise in certain areas of creative endeavour.  It's early days, but I'm sharing here a selection of developmental sketches and visualisations. 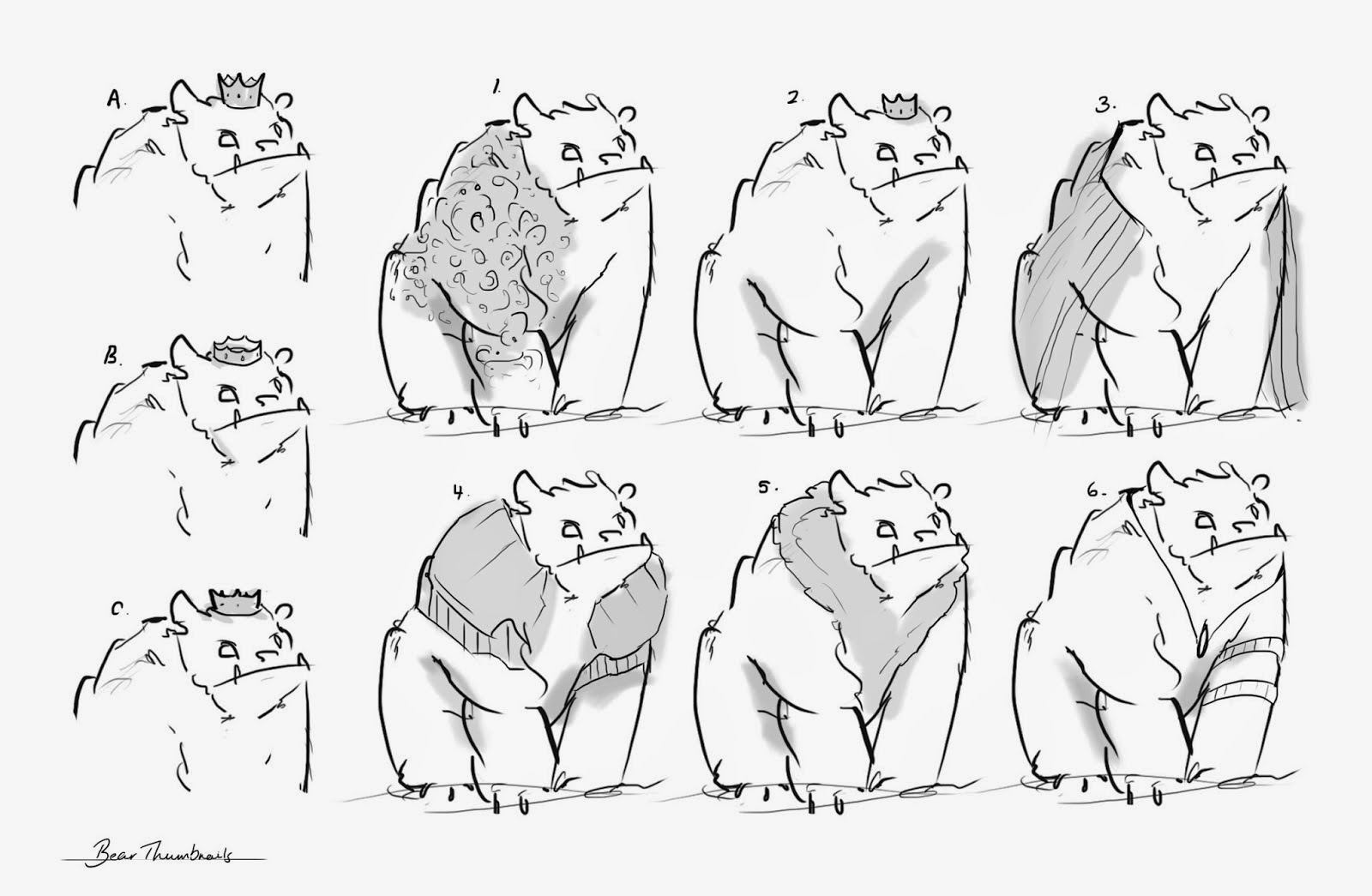 Our year one students have not long submitted their From Script To Screen projects - certainly their most demanding project-to-date, and something of an insight into the true challenge of seeking to tell engaging stories in cgi.  They had to pre-produce a one minute (or thereabouts) animation, derived from their own original scripts - no small task!

Charlie Serafini - A Tern For The Better

A Tern For The Better - Animatic 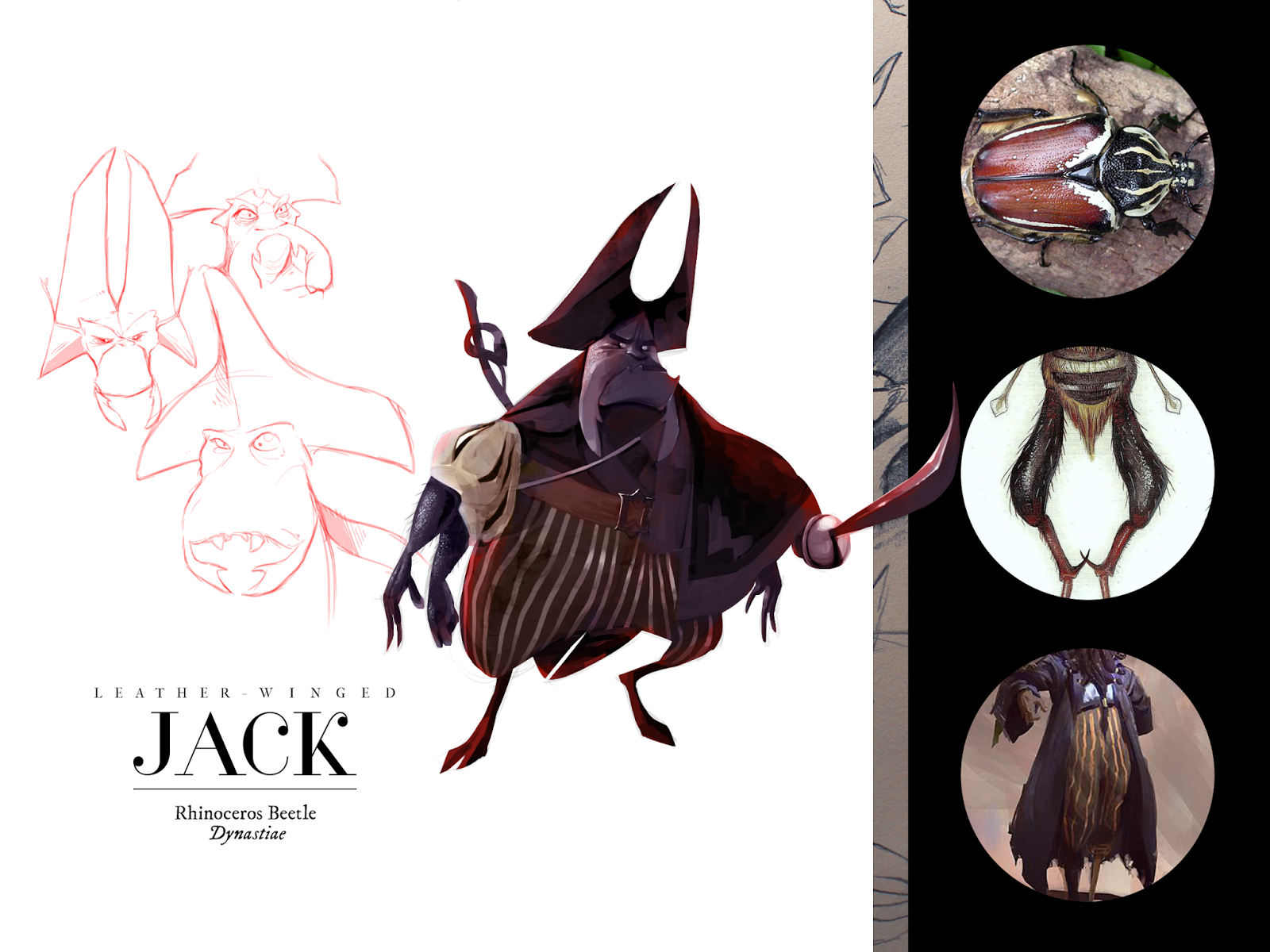 I can't help continue to celebrate all the wonderful drawing that happens on the course in support of our students' ongoing development as expressive artists, illustrators and creatives.  Recent life-drawing sessions have seen students working in a wide variety of media and with a range of different life-models.  Drawing tutor, Vicky Fountas is always pushing our students to broaden their embrace of all that drawing can be, and to soak up new ways of expressing what they see and experience in the drawing studio.

On February 10th, the students of Computer Animation Arts boarded a coach at 5.30am in the morning and began their journey to Barcelona. Grey clouds soon gave way to more pellucid Spanish skies, and even the most snoozy of students couldn't help but perk up at the sight of oranges growing on trees. 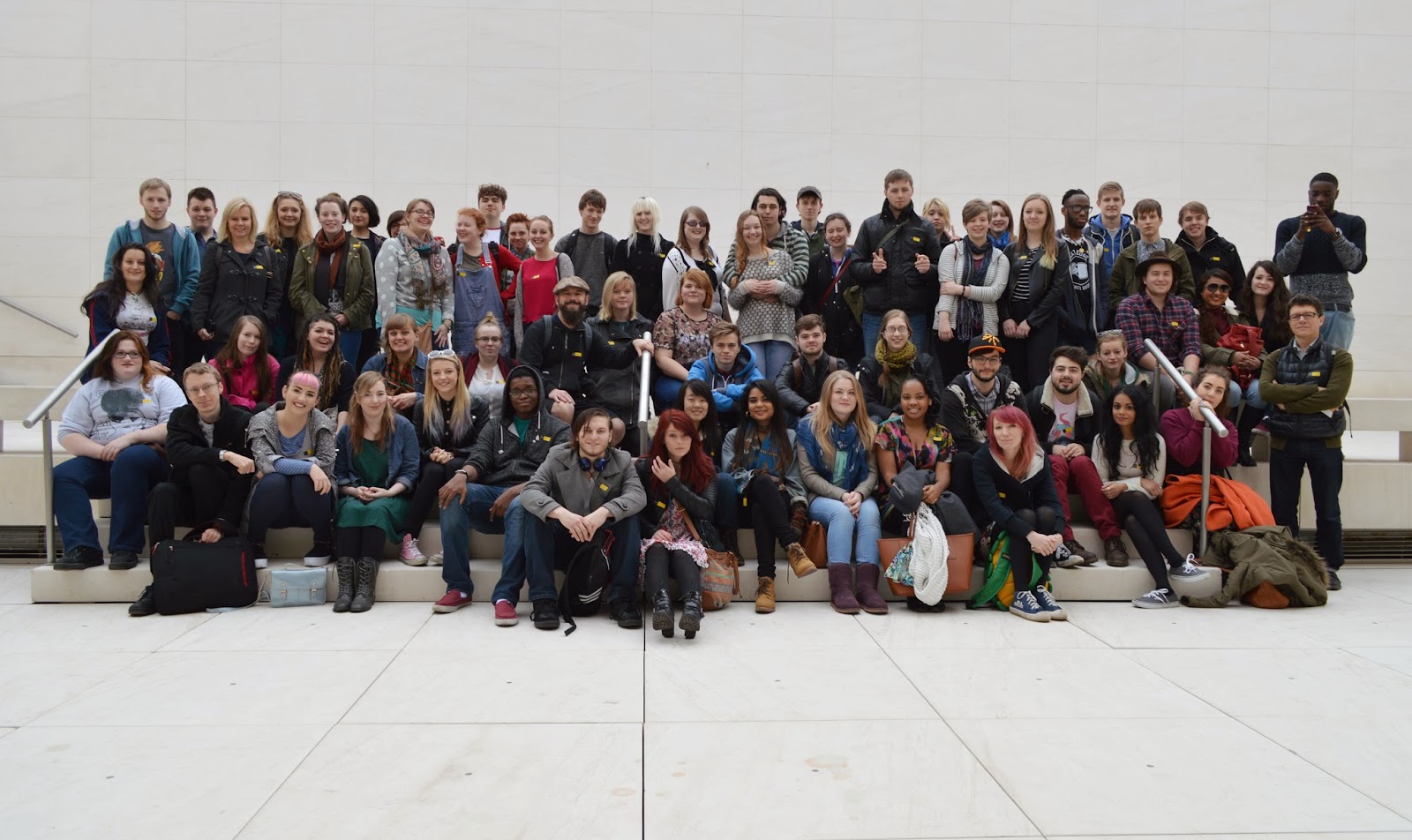 Highlights of our field trip included our visit to the Pixar Exhibition at the CaixaForum - an exceptional show and constant delight.  Our students left feeling both hugely inspired, but also reassured; for all of the wonderful drawing and design work on show, the curators of the exhibition were keen to demystify the magic of the creative process.  An example of this was the simple, gestural drawing of Liguini from Ratatouille, exhibited complete with the scrap of paper affixed over the character's head, on which a further drawing of Liguini's head corrected the original pose. Our trip to the CaixaForum was but one of our cultural escapades during out time in Barcelona; you can find a more complete collection of our holiday snaps here.


Congratulations now to current year 3 student, Kym Mumford, who has been accepted as a Team Leader for the Student Volunter Programme at this year's SIGGRAPH exhibition in Los Angeles. This will be Kym's third SIGGRAPH experience, having already successfully participated at the conferences in Vancouver and Shenzhen, and she's clearly established a reputation for herself as a highly-capable and engaging individual.  Well done, Kym - we look forward to reading about your LA exploits here on the group blog. 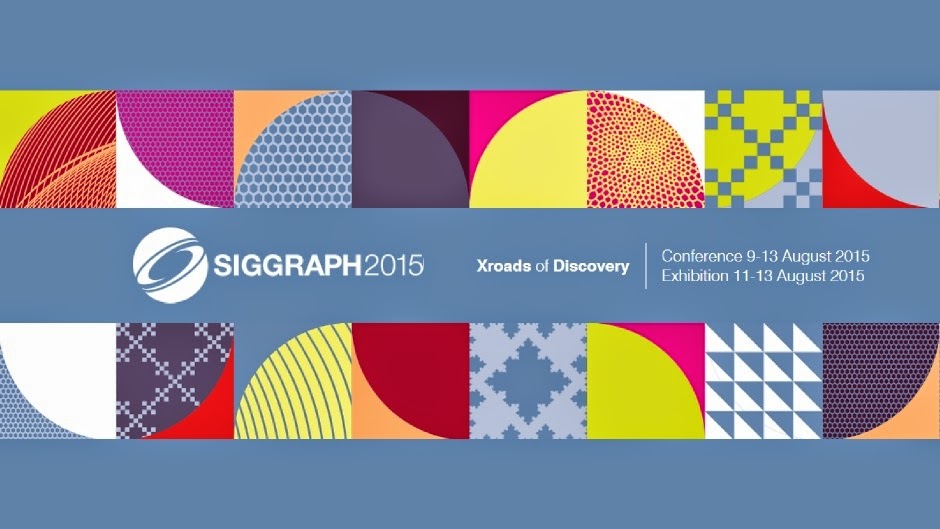 The hyperbole of the Amercian football Superbowl is all but dissipated now, but it was with delight and satisfaction that I noticed some familiar names in the end credits of this stop-motion epic produced by A&C Studios to coincide with all the promotional hoohah.  Look closely and you'll see CAA alumni, Bob Sparks, Dayle Sanders & Nat Urwin all credited. You can read more about their Lego-brick stop-motion marathon here.


What with one thing and another, February has been a busy month; no sooner had I returned from Barcelona then it was time to get another kind of cultural experience up and running. I exhibited some lightbox-based photography at the Horsebridge, Whitstable, alongside Phill Hosking and Phil Cooper - old friends and talented artists.  Entitled PH + PG + PC, the exhibition's theme derived entirely from the fact we all have the same name - not exactly 'high concept' in this respect!

The week long exhibition was very well-recieved; you can see the build-up and private view images here.  Sarah Banville, Galleries Officer at the Horsebridge had this to say in regard to our creative and curatorial efforts: "Thank you for such a truly incredible exhibition, we are so happy you have been here and it gave us a glimpse at the level of exhibition we aspire to attract here for the future... Thank you again for the best exhibition I have seen here in years."

As a last hurrah, I'm sharing here the series of images I exhibited, but you'll need to imagine the ethereal glow lent them by dint of being originally displayed on those specially-commissioned light boxes. My intention was to present the images as they were experienced at the moment of their creation - i.e. as sudden coruscations of light in the otherwise inky black of the countryside; short-lived phantasmagoria, like St Elmo's Fire, or an alien visitation glimpsed by illicit teenager lovers from the backseat of their car... "Keep watching the skies!" 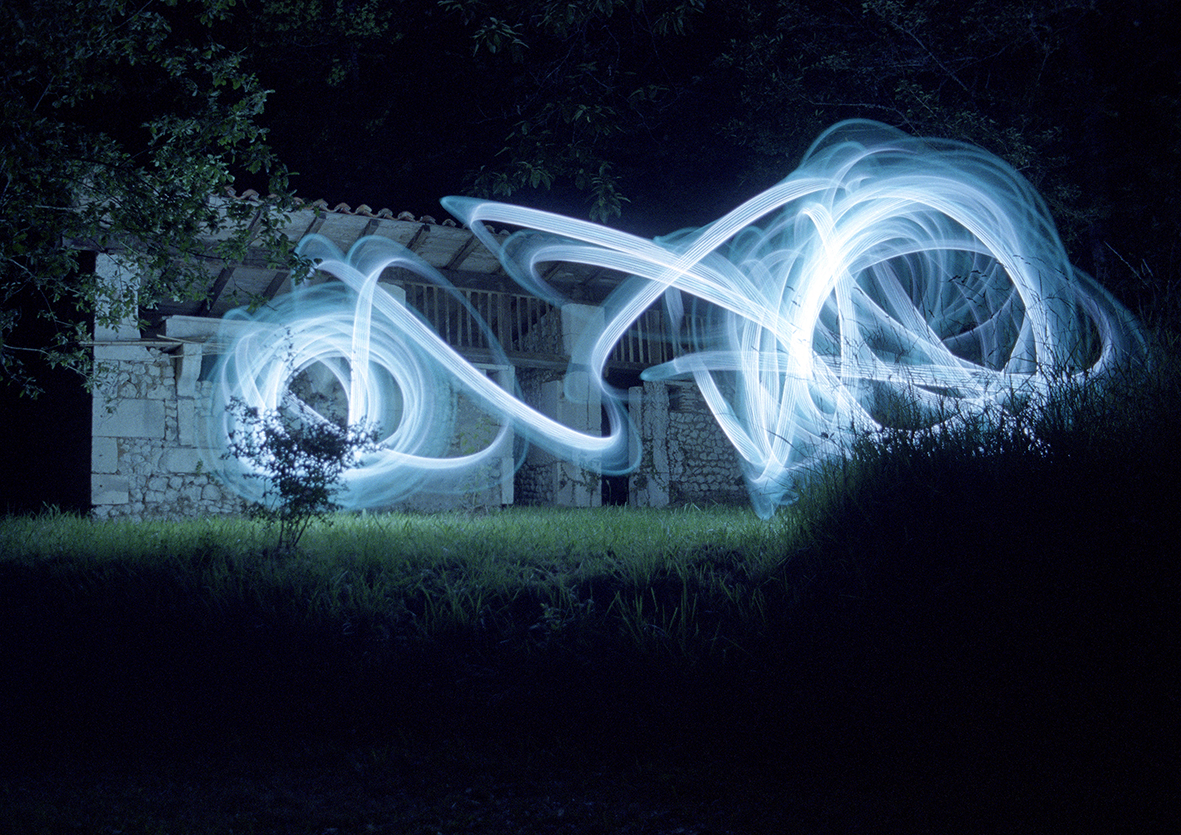 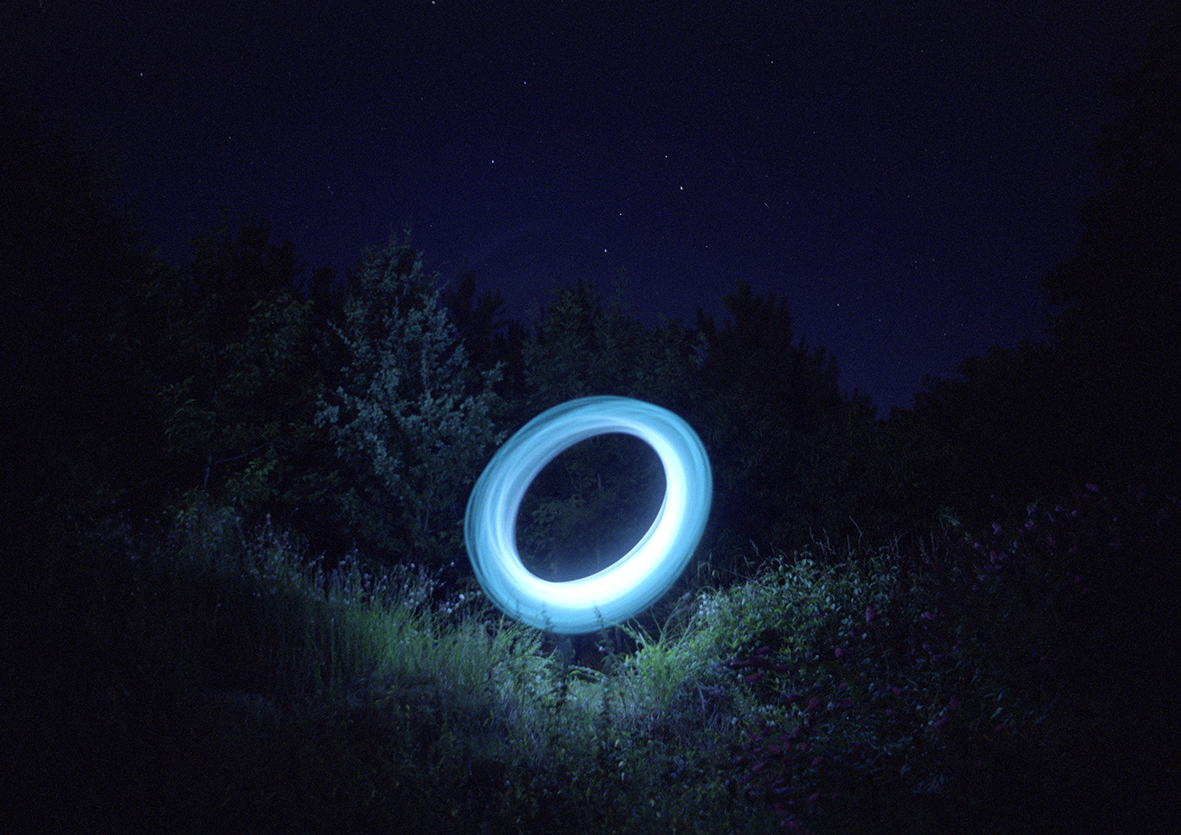 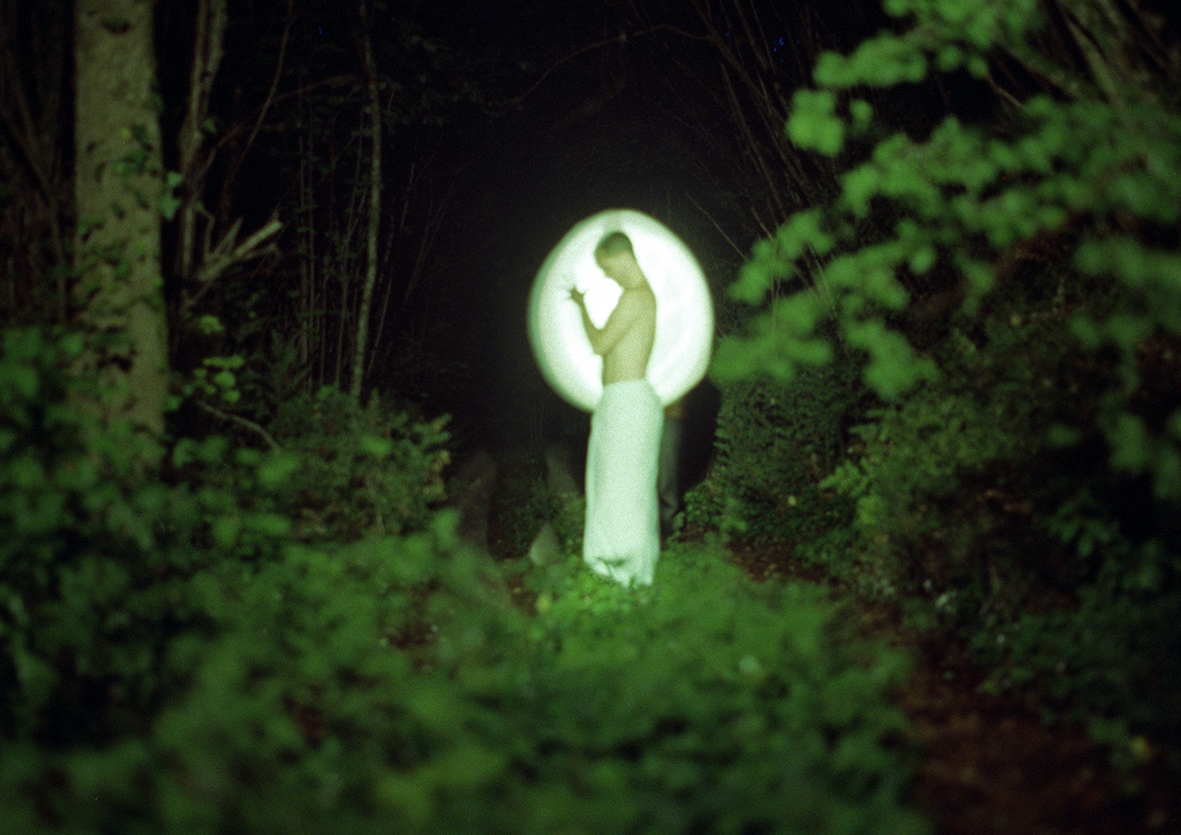 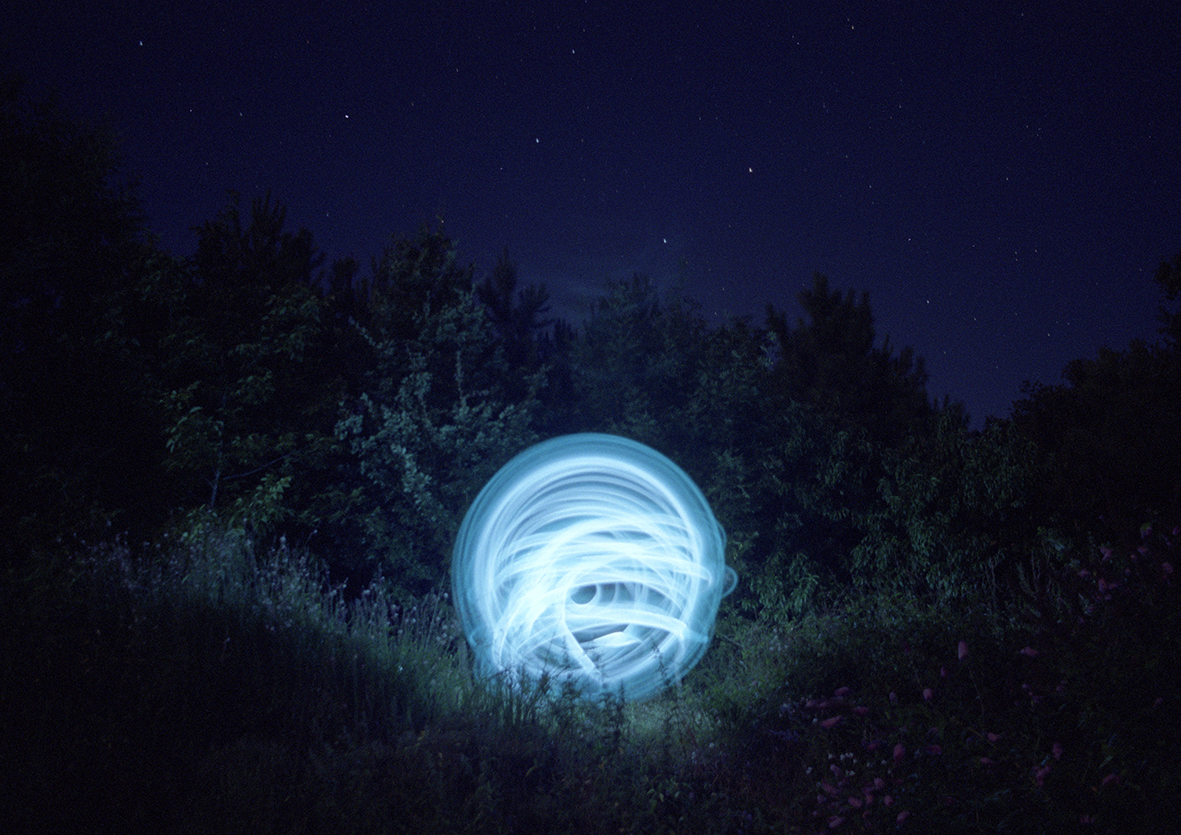 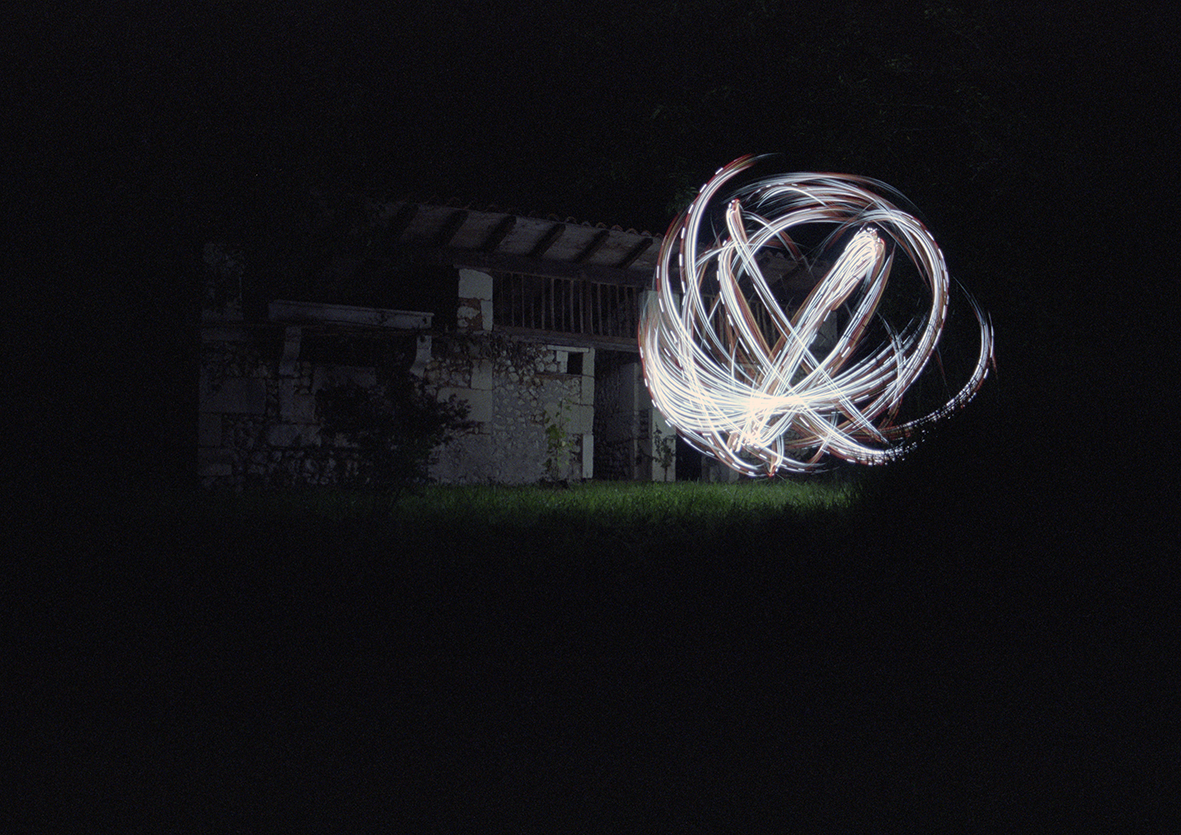 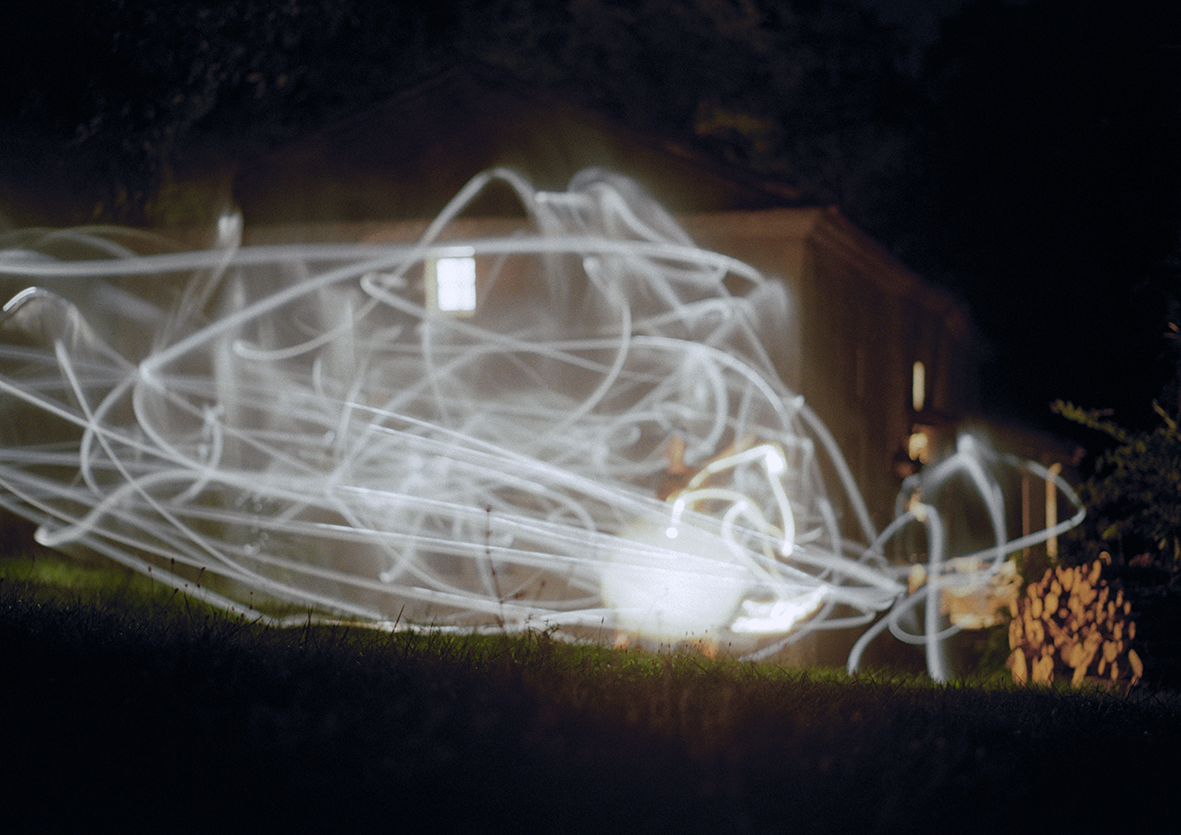 Meanwhile, the reviews for the Chimera series keep coming, and as promised, I'm sharing with you the good, the bad and the ugly - on the principle that you should always practise what you preach! If you're creative and you produce stuff, you've got to put it 'out there' - and if you're putting stuff 'out there', you're inviting feedback and criticism - which you need to survive, learn from and use positively, so with that in mind...

These most recent reviews were posted to the Goodreads website, where 'Sh3lly' had this to say about Chimera Book One: "I think this would be great for school age kids, a younger Harry Potter and Narnia crowd. I am rating it 4 stars instead of 3 because, I think as an adult, it didn't quite hold my attention as much as it went on. But I think this is a perfect story for a younger audience so am rating up. It's written well; dark, but not too creepy, and I thought it was unique and imaginative." So far, so good, but Kristen Bowker gave the same book a stinging single star, saying, "Hard to stay interested, seems very childish."  Happily for me, another reviewer, 'Roxanne' disagreed: "I have to say I really enjoyed this story and at only 100 pages long you can jump right into the next one straight after. I found this to be really original and I liked all of the characters. It is absolutely packed full of action, each chapter ending with a BOOM to keep you hooked (which definitely worked for me)."

However, loyal reader Roxanne was much less enamoured with all the goings-on in Chimera Book 2, saying, "Like the first part this was a very fast paced and action filled read, however, I didn't enjoy it quite as much as the first... It just got way too complicated and messy for me. It got to the point where I just thought that even the characters don't even know whose side they are on, they just swapped sides continuously, so many times I lost count and everything just started to confuse me. There were new characters being introduced all the time with bizarre names that within a page I had forgotten who they were. I thought the way every chapter ended was really good in the way that it held my attention and made me want to know what happens next.  I just hope the 3rd book will be less messy."

Fingers crossed that Chimera Book Three doesn't disappoint!  I'll be sure to let you know either way!

It's with great pleasure that the course team announces the return to the fold of one of our most talented alumni; Tom 'Class of 2014' Farrington inspired an entire creative community with his Experiment IX animation. I'm sure I wasn't alone in looking forward with real excitement to each of his animation updates as he brought his cast of feline characters to life during the course of his final year. Much to the admiration of his classmates, Tom seemed to make the painstaking business of computer animation look easy. Tom is joining Computer Animation Arts as our very own Artist-In-Residence. Tom will be working on new animations of his own, but will also be available to advise, help, trouble-shoot and mentor.

By way of a fitting finale to this edition of the PWTM, I'll leave you with one of my favourite things: Tom's play blast of his Fat Cat character losing his cool.  When this update first appeared on Tom's blog, I watched it, then I watched it again - and then I kept watching it because I was no longer seeing a computer model being put through its paces - I was relishing a consummate performance! Enjoy.