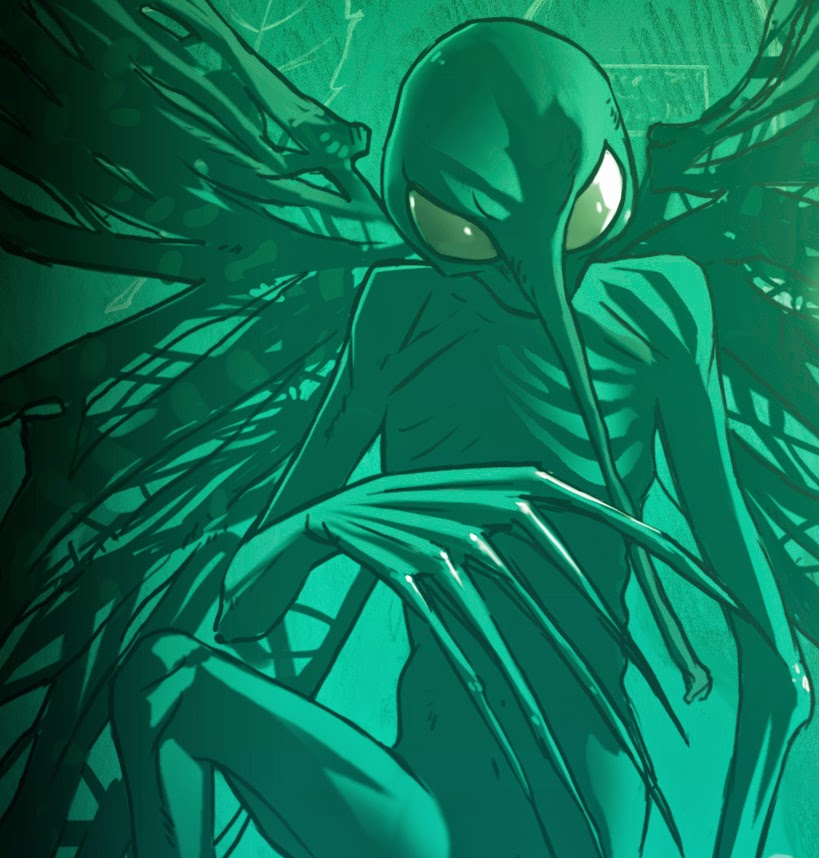 ‘Good riddance,’ muttered Kyp, as he crept back into the shadows of the junk-shop. He should have been shocked or upset, but all he really felt was relief.

He went further this time, deeper, pushing through racks of old clothes that smelled of perfume and pipe-smoke, and picking his way across causeways of boxes. He ducked beneath dangles of dusty chandeliers and inched past steeples of leather-bound books, ignoring how the hairs on his neck stood up as unseen things creaked and shifted in the shadows. He was soon lost, but he didn’t care.

Out of breath finally, Kyp stopped. He listened, hearing only the percussion of clocks: and then something else:


This time he felt it too, a tremor throbbing through the floorboards.

Something else was here with him.

The cabinet nearest him was supported on carved claws, the gap underneath big enough to hide him. He wriggled under it and made himself lie still and silent. A great shadow moved past his hiding place.

Kyp waited until all he could hear was the distant cry of cuckoos leaving their clocks. Satisfied, he crawled from under the cabinet and stood up, only for something tentacle-like to entangle his legs. With a vicious tug, it tipped him face-first onto the floor and reeled him backwards like a fish. He came to an abrupt halt as the tentacle tried pulling him through a too narrow gap between cupboards. It yanked him once, twice, but Kyp was wedged fast. Enraged, the tentacle released him.

On his feet again, Kyp sprinted away. Cupboards crashed to the floor as the thing gave chase. He ducked into a corridor between thick walls of cloth-bound books, only to find it blocked by high wooden shelves. Undeterred, Kyp used the shelves like a ladder and climbed on top of them. They teetered precariously and Kyp jumped onto a nearby cabinet before the shelves could tip over. He leapt across to a second cabinet as the shelves toppled the first. As the first cabinet fell against the second, Kyp jumped to a third, and then to a fourth, and then on without stopping. Behind him, cabinets collapsed in an expanding fan-shaped wave. Glass smashed and wood splintered, gusts of dust thrown upwards like spray at the prow of the ship. Engulfed by the oncoming surge, Kyp was thrown forwards and hit the floorboards hard. He covered his head and shut his eyes…

When nothing happened, Kyp sat up and looked around. Only now did he see the maze-like corridors of the junk shop were but a small section of a much bigger labyrinth. He’d fallen just outside its perimeter, a large section of which now lay flat.

Perhaps the tentacled thing was buried, squashed flat? Kyp had no intention of hanging around to find out; nor would he be venturing back into the labyrinth to find his way back to Open Sesames. The junk shop was gone; Kyp knew it, and the world with it. He was somewhere else now and that was that.

He shook the sawdust from his short brown hair and turned his back on the labyrinth. Before him was a great rift in the floorboards, a chasm that zigzagged in both directions. Its walls were formed from layers of things, most crushed flat and unrecognisable, but some as distinct and well preserved as the fossils at Professor Pettifog’s. Kyp made out the shape of an old-fashioned bicycle embedded into the ravine wall. The rock face glistened with threads of gold, silver and copper, actually skeins of house keys and pennies. What he’d taken to be ledges of rock were sofas and tree roots lengths of garden hose.

Spanning the chasm was a rickety bridge, its treads tea trays lashed together with Christmas lights and skipping ropes. On the other side of the canyon, the labyrinth of furniture continued.

Three figures waited for him on the other side of the ravine, standing in the shadows just inside the labyrinth. He couldn’t see their faces, but the voice he recognised at once.

‘Darling! I’ve been looking everywhere for you!’

‘Now don’t make a fuss. I just want us to be together.’

Kyp looked over his shoulder at the fallen cabinets. He saw them undulate.

Kyp hesitated before hurrying onto the bridge. Its guide rails were knotted together from dressing gown cords. He gripped them tightly and stepped gingerly from tea tray to tea tray. The bridge strained against its fixings. The Christmas lights flickered. Something somewhere went snap! Kyp stopped. He glanced back to see something monstrous rise up out of the fallen cabinets.

‘Quickly,’ said his mum. ‘It wants to eat you up! Come to me now and belong to me forever.’

‘You wanted to get rid of me.’

‘Nonsense! I want us to be together.’

‘I heard you. You’re not my real mum anyway.’

The three shadows at the end of the bridge seemed to confer. Then Kyp’s mum said something odd.

With a soft popping sound, a green light appeared. It moved towards the bridge, the three figures walking behind it like carol singers with a lantern. Kyp tried to see past the illumination, which was bright and very beautiful. The bridge groaned as the figures walked across it in single file. The green light increased in hue and intensity, until Kyp could see little else.

Kyp blinked. With one hand he rubbed his eyes. With the green light gone, he saw the three figures coming for him along the bridge were not his mum and dad and the shopkeeper as he’d first supposed, but something else.

Kyp scrambled back across the bridge, but the tentacled thing was waiting. It reared up, flinging furniture aside like matchsticks.

The guide-rails twanged. Showers of sparks fell prettily into the ravine. The Christmas lights winked out. What happened next seemed to happen very slowly.

With a final snap! the bridge broke apart in the middle. For a moment, the bridge seemed to hang in the air. Kyp watched the guide-rails slacken. He even had time to look past his feet and see tea trays spiral away like sycamore seeds. After that everything became a blur. Kyp slammed against the chasm wall, dangling from a knotted length of dressing gown cord. He struggled to find a foothold, but the rock face was formed of candle stubs and billiard chalk and crumbled under his shoes. He heard what sounded like the flap of wings. He felt a sudden hard tug on his foot. The cord supporting him broke and Kyp gave a cry as he fell... 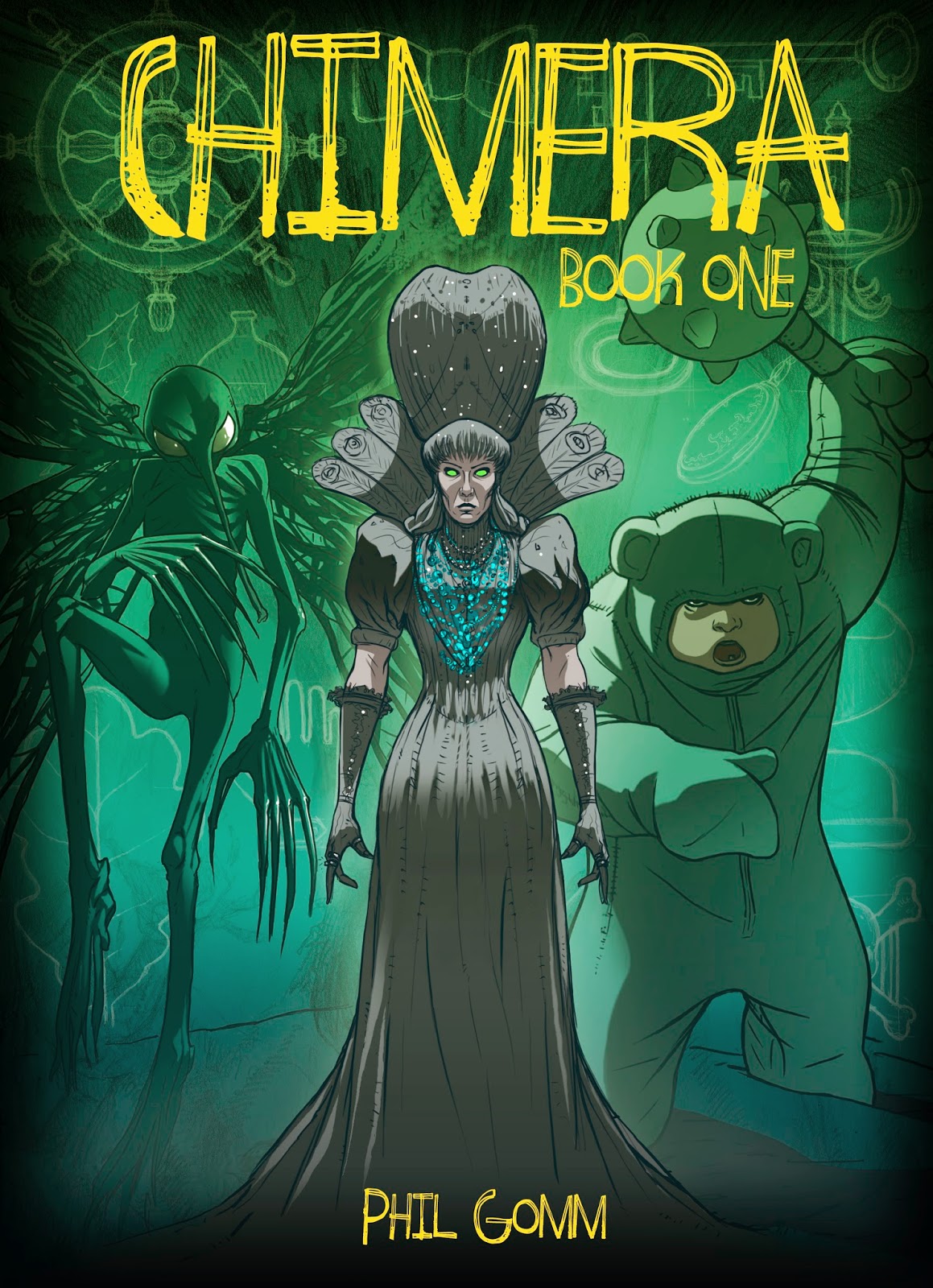