Hello!  As Phil has already introduced me, and most of you either know me already or have at least had me poking around your blogs for the last week or so, I won’t go into too much of an introduction here, but will keep it short and sweet.


So, I could kick off with a Phil-esque ‘Who the f@*k is Jackie Hagan’ spiel, but I’m far too ladylike for that!  But I guess you might still want to know why I am here, picking your film reviews to bits and generally dishing out advice, even when it’s probably not wanted…


So, me in a nutshell – I have always seen myself as a ‘crafter’ rather than an artist, although I do paint too, and I’m certainly  not particularly academic, but in 2005 I took the big step of undertaking an Access course in Art and Design at UCA on a part-time basis, just to see if I could do it.  I discovered I could, and enjoyed myself so much, that the following year I took the even bigger step of packing up work, and embarked on an Honours degree in Applied Art.  Roll on 3 years, and there I am graduating with a First Class Honours degree – not bad for an old girl! 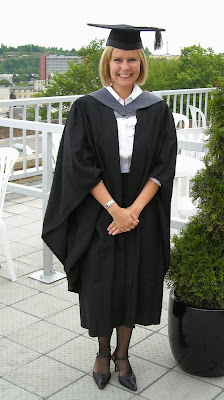 I have to say, that it was my dissertation that swung it for me; my studio work was good, but only just scraping the 70% mark that you need for a First. I opted to do the extended dissertation, which rolled in at around 14000 words I think, and luckily for me it paid off, and nudged my mark above that crucial 70.


Anyway, I had had such a good time here at UCA, that I decided to stay, and luckily for me, my first ‘posting’ was down in the depths of lower 4th in CGAA, where I have lurked ever since.


So that’s me… and over the next few days, I am just going to be giving you a few hints and tips on writing your film reviews…which in turn, will hopefully help you when you start writing your essays, and eventually, your dissertations (which, believe me, will come round sooner than you can ever imagine!) I am a BIG believer in the importance of the written elements of your course... it could make all the difference between you walking out with a First, or not.


If you look at your timetable, you will see that the films you are going to watch are all listed already, so my first suggestion is that you prepare yourself prior to watching the film, by doing a quick bit of background reading. Try and find out what the themes are within the film, have a look at the context in which it was made (what was happening in society and culturally at the time), what the director has to say about it etc.  Remember the reason you are watching the film; try and find a connection between the cinematography and your own project. Also check out the running time…you are going to be watching some ‘challenging’ films at times, and it’s good to know how long you have left before the end!
Hint - tomorrow's film is Fritz Lang's Metropolis (1927)... get busy!


Don’t go home on a Tuesday evening and relax – strike while the iron is hot! It is much easier to write your review while the film is fresh in your mind and while your brain is still processing whatever horrors Phil has inflicted on you (sorry Phil… too many years of Dancer in the Dark and Funny Games!) Also, it is all too easy to let that one film review slip, and before you know it, you have 3 or 4 to write, and the deadline is in sight.  Just do it. Now.


Look out for more tips tomorrow :)