This is the first PWTM post-GDPR... and in order to comply with the new regulations I sent out an 'opt-in' email for those subscribers wishing to remain on our mailing list - and I deleted everyone else! We've probably lost a few loyal readers in our great data cull, for who amongst us hasn't felt snowed under by all the recent emails asking us to 'opt-in' (and who amongst us hasn't secretly enjoyed the idea of all those endless 'sell-you-stuff' emails just going poof into thin air!). If you didn't find the PWTM in your inbox this time - and you were expecting it, and you want to continue to receive it, please do drop me a line at pgomm@uca.ac.uk and I'll sort it.  Similarly, if you're new to the PWTM and you'd like to join our new GDPR-compliant mailing list, then get in touch!

Incredibly, the next edition of the Post With The Most will be our New Designers Special Edition showcasing the final iterations of our final year films as they'll appear on our exhibition stand at the Business Design Centre, Islington, London, in the first week of July.  How very quickly the wheel has turned!  This latest edition is of course a celebration of our students too - enjoy these creative highlights from all three years of Computer Animation Arts at the culmination of the academic year.

Fantastic Voyage is the final project of year one, wherein our new recruits cut their teeth on their first full cgi short film - commissioned by a client - and requiring them to take an idea from script to screen and thus negotiate the entire production pipeline.  It's no small feat, and this year our first years were typically ambitious.  Enjoy these three examples - Frankie Sutton's The Big Jump, which re-imagines the nuts-and-bolts of wind pollination as a Second World War boys-own adventure, Megan Robson's pinball-table themed cardiac cycle, and Annie Robert's 'Art Of' for her Pollination Waltz, which splices the principles of insect pollination with vintage ballroom dancing!


The Premise project is both an ending and a beginning, for while the project constitutes the final hurrah of Year 2, it also marks the beginning of year three.  Premise requires our year 2 students to develop the foundations for their final year films.  I really enjoyed their recent crit, where we got to see their ideas playing out as first pass animatics and proofs-of-concept, a selection of which I'm sharing here.

It's a strange season for our final year students; after the high-stakes, high-anxiety and high-risk final few days of their respective projects, the actual hand-in and days afterwards are notoriously anti-climatic. At time of writing, our graduates-in-waiting are eyeballing the horizon for the announcement of their final degree awards, while the course team avoids their lazer-sighted eye-contact very assiduously for fear of giving the wrong impression.  Of course the real and lasting value of a university education is not itself enshrined in these students' final submissions - however resolved or otherwise.  The true value of these difficult and provocative three years will likely play out much more slowly; education is rarely an instantaneous transformation, but rather something understood finally after the distance of years.  That said, there are immediate goals met and high-achievements to be celebrated.  Enjoy this small selection of work from the 'Class of 2018' - and be aware for its makers there are still more tweaks, improvements and polishings to be undertaken before the London show.

*Dee's When is now a finalist at the SE10 Film Festival - congratulations!

*Some exciting news for Becky's film too, which has made the official selection for the Gold Coast International Film Festival!

Loyal readers of the PWTM will know all about the course's fantastical visualisation of Benjamin Britten's The Young Person's Guide To The Orchestra.  In addition to its various screenings alongside live orchestras in France, Germany, Poland, Bulgaria, Slovenia and Slovakia, Red & The Kingdom Of Sound is also taking in a grand tour of international film festivals.  One of our key responsibilities to the project is to use animation to diversify audiences for classical music - to get it in front of as many different types of people as possible, and with official selections in festivals in the United States, Canada, Brazil and Indonesia, Red is doing just that!  It's been a pretty exciting time for the Kingdom production team, collecting our laurels - not resting on them obviously! - and we were particularly thrilled to win 'Best Animated Short' at the Redline International Film Festival!  The making of Red & The Kingdom Of Sound was a proper 'family affair', with CAA's staff, graduates and students combining their efforts to get the job done; that our joint effort is out there garnering the attention of our peers is very satisfying! 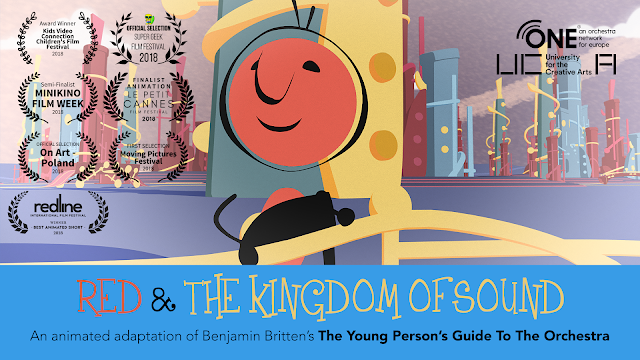